The Skareckis came out for a big Colorado ski trip adventure visit. They arrived on Wednesday morning and spent Wednesday through Friday exploring the area around Boulder. They hit the Butterfly Pavillion, the Louisville Rec Center featuring its big yellow water slide, and even went indoor skydiving in Lone Tree. Thursday night Marc's college friend Marissa came over and we had a big dinner with Rotisserie chicken and lots of trimmings. This was followed by an intense game of Bananagrams wherein Michale validated my prediction that she would dominate. Michale and I had to get up early on Friday so we retired around eleven and left the three of them to hang and talk until the wee hours.

Friday after work we had some logistics to deal with. Marc had sent a package with their ski gear UPS for guaranteed Friday delivery. However, with the big snowstorms in the east, it didn't make it, and we were scheduled to head up to Breckenridge early Saturday morning. So we had to drive around Boulder and pick up some borrowed gear in addition to hitting Sports Authority minutes before close to quickly outfit Sunny with snow pants, gloves, long underwear, and goggles.

We drove up Saturday morning. We sang The Twelve Days of Christmas as well as Sweet Potato in the car on the way up. Marc and Casey also talked at length about how great They Might Be Giants' Here Comes Science album is, always lamenting how they couldn't remember any of it. They then proceeded to sing no less than twelve of the album's nineteen tracks a capella flawlessly. During the trip I loaded it onto my mp3 player for the ride home to verify all the lyrics. Sunny and Casey particularly got fired up for the Einsenhower Tunnel (Einsenhower Tower as Casey calls it) and the Continental Divide. 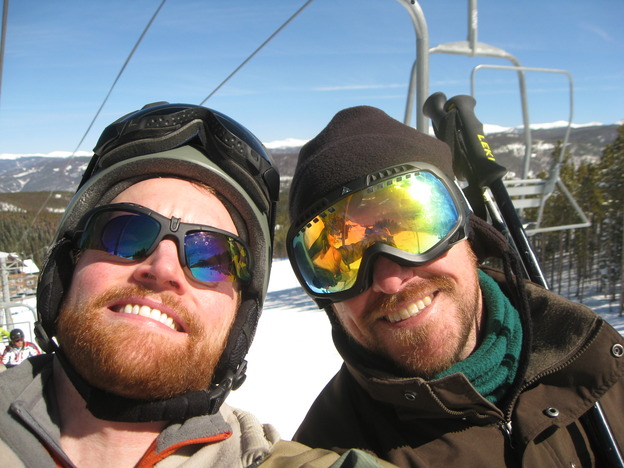 We rented a sweet ski-in ski-out condo right on the slopes at Breckenridge. The skiing was pretty great. Michale came up Saturday to join us for hot tubbing, swimming, dinner, and skiing Sunday. It snowed five inches Sunday night. Michale and I sat in the outdoor hot tub sipping hot cocoa while the snow fell on us. Marc and I headed out alone Monday morning to ski the freshies and hit the summit. We made a lot of runs between 8:30 and lunch time. Then Casey and Sunny joined us. They found some good runs for Sunny including a few little entertaining themed runs through the trees with castles, dragons, cobras, haunted mine graveyards, etc. 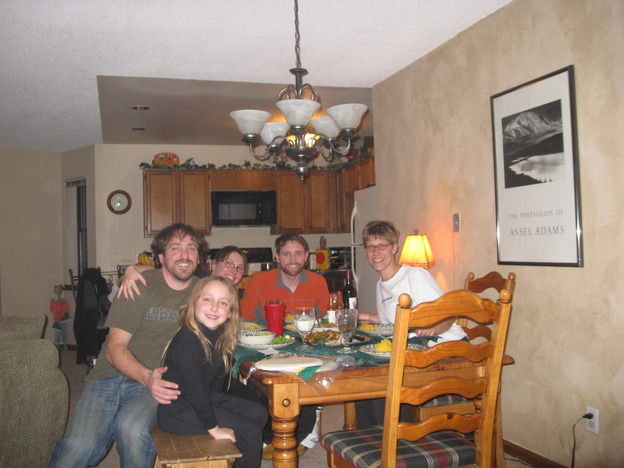 Tuesday was going to be a "perfect storm" of circumstances to try snowboarding. I have a season pass so I'm not concerned about the lift ticket. We had a condo so I could bail and go back to skis if needed. Marc was there and willing to give me a lesson. We had fresh sow and plenty of warmth and sunshine on Tuesday. It was mid week so it was not too crowded. So with all these circumstances aligned, I figured it would be fine to try snowboarding instead of just going off on my own while the Skareckis stuck to green circle runs. So I rented a board, packed a bunch of bath towels into my snow pants to pad my knees and butt, and headed out there. Marc gave me some tips, and within about four runs I was able to get down the learner slope without falling. 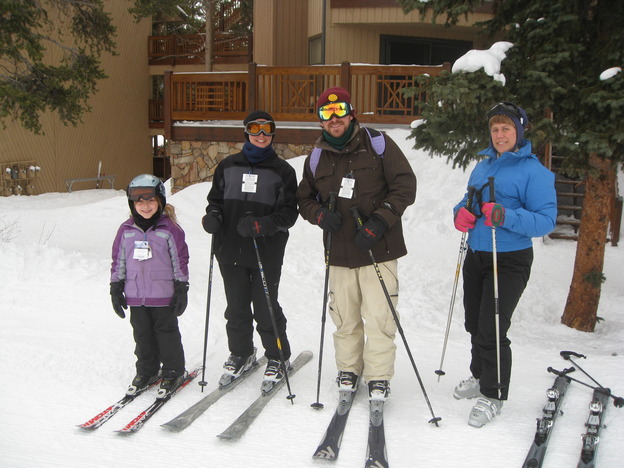 The Skareckis went over to lift nine and left me on the beginner run to try to get my skills together. I got the basics but was still not quite stable. After a long lunch break and a nap, I went back out for a few more runs. I made my way over to peak nine with great effort and fear, only to take one run then realize it was already 3:30 and the lifts would close in half an hour, so in order to get back to the condo I would have to B line it back to peak eight. I made it back in time. I was very tired though since it's very different leg muscles than skiing, so on the slope back to the condo I was wiping out every twenty yards or so. Anyway, it was cool to get a chance to try it, but I have no plans for further experimentation unless unusual circumstances hit again. It's just too awkward with the undoing and redoing the binding and the awkward pigeon toed shuffle. 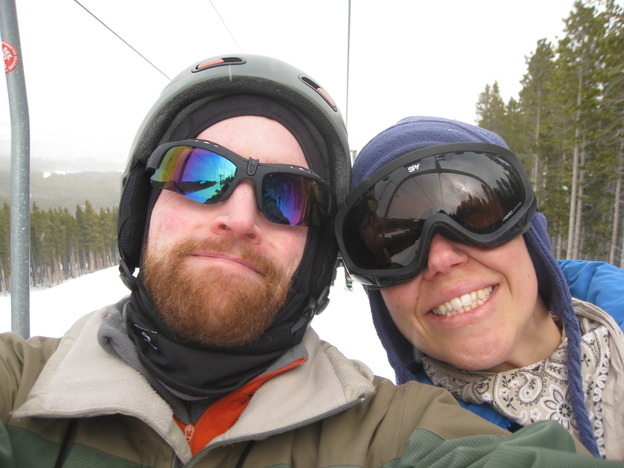 We got up early Wednesday morning and went straight to the airport. It was a really fun trip and some great skiing!

The rest of thephotos are here.