Last Wednesday I flew out to Austin, Texas for Honk!Tx, a festival of community street bands. Shaun from Gora Gora was on my flight and several other honkers toting instruments and megaphones were making connections in Denver and on our same flight. My accommodations for the night were at a hostel in Austin, and a friendly man with a British accent at the airport information desk warned me sternly that it was in an unsafe neighborhood and be careful walking the several blocks from the bus stop to the hostel. Shaun and I took the $1 Capital Metro bus together, and I got off near the hostel. The neighborhood looked mostly fine to me if a bit pedestrian unfriendly. I picked up some hairspray since there happened to be a Walgreens right there. I didn't end up using it since most of my transportation was by bike and I was wearing a mohawk-incompatible helmet.

I at a meal at the Mexican restaurant on the corner and then walked a few blocks to the hostel, which backs directly to the lake. The hostel living room was fairly cozy and the bedrooms were not so much, as you might expect of dorm-style sleeping for $25/night. But it was OK. Alice flew in later that night and got into the hostel a bit after 1 AM.

In the morning I made some pancakes on the hostel's griddle and worked a few hours. Then Alice and I took the bus to East Austin where our Honk community host house was. Our hosts were out for the day but left a key for us so we could settle in. I worked from there a bit and then headed to the East Village Coffee shop to work the remainder of the afternoon.

After dinner Alice and I walked 1.6 miles or so to downtown for the pre-festival Brass Band Blitz event being held at Red 7. We got some food truck BBQ and watched WWF wrestling before heading into the venue. Once in the venue, Alice went to warm up her trumpet and found her first valve wasn't working. We frantically saught help to see if anyone could repair it, but no one was able to do much, especially without specialized tools. However, Alice found out she could actually mostly play it as it was and we went to parade up 6th St with the contingent from Emperor Norton's Stationary Marching Band (many bands did not yet have all their members in town). 6th St in Austin is basically bro bar central, and for the most part seemed like they could care less about a mostly-steampunk-adorned marching band parading down the strip. When we were almost back to the venue, Alice realized her third valve slide (A small U-shaped section of the trumpet tubing) was missing and went back to look for it. I offered to come with her, but she declined (in retrospect, I should have gone with her despite her refusal). So I finished the parade and then went looking for her. I found her on her way back to the club pretty shaken up by the night's struggles including the valve breaking, losing the slide, and getting bothered and cat-called by the drunken assholes on 6th street while looking for her slide. We went together and made another pass through the parade route, but as you might expect, we didn't find the slide.

After the parade there were band performances throughout the night at Red 7, alternating between the indoor and outdoor stages. It is common in Austin for venues to have two decent-sized stages, it seems. Most of Gora Gora was in the process of arriving that night and by around 11 PM or so, a quorum of the band was all there hanging out and listening. I particularly enjoyed the set by the Bucharest Drinking Team and how loud some of these bands are without any amplification. 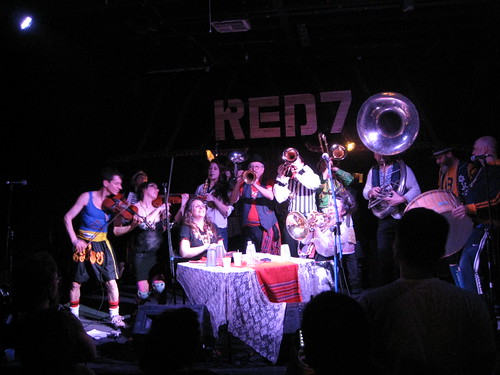 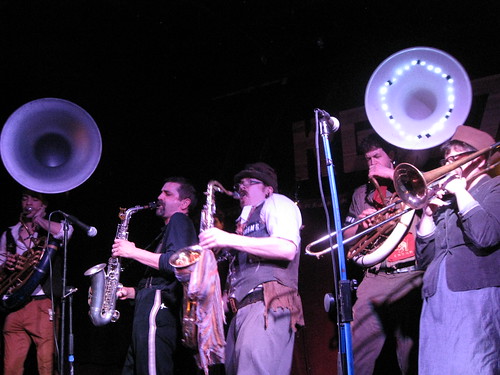 Most of the band wanted to stay for the entire Young Fellas Brass Band Set, which went until nearly 2 AM. I was exhausted at that point and just wanted to go to sleep. We walked home and stopped along the way at a food truck to eat. We almost walked past it as most of the lot was dark and looked empty and closed but JJ ran across the street to investigate the one food truck that had a set of strip-lights still on and indeed, that one was still open and serving Jumbalaya on a stick. By the time we got home it was 3 AM and poor Doug our host gets up at 6 AM to cook breakfast every morning. The house is a small two-bedroom rectangle plus a small camper in the back yard and the hosts were housing themselves plus eight band members that first night!

I slept on the floor of the guest bedroom just using my little youth-sized sleeping bag as both blanket and bedding. Friday morning I got up and slipped out to East Village Coffee again to work just enough to record our weekly sprint demo and do some last minute bug fixes. But officially, it was a day off, so back to the house I went at noon for a rehearsal. The band had saved me a breakfast burrito, which I devoured and thoroughly enjoyed.

After rehearsal we walked a mile or so to a house that Honk was using as a loaner bicycle depot and picked up 4 bikes we would be relying on heavily for transportation. Stephen, bless his soul, drove his van by himself 14 hours hauling most of our instruments and gear, and this would prove key to getting us where we needed to be. Friday night we biked to South Congress for a round of performances at 2 venues next door to one another. We played the smaller of the two venues and the crowd was small but enthusiastic. After the performances we crawled around the area a bit and glommed together with some folks from Bucharest Drinking Team. We ate pizza at Home Slice and Shaun and I got cupcakes from the food truck nearby.

On the bike ride home the chain broke on my department store loaner mountain bike and we had to take turns having other rides push/pull me up hills and then have me coast down. We made it back though.

Saturday morning we got a late start and headed on bike over to the park where the day's performance were centered. We were on line to get breakfast tacos when we realized our show time was not 1 PM but noon, so we had to high-tail it over to our spot, set up, and play an hour set. That was a pretty fun set and I was grateful for cloud cover most of the morning and early afternoon. After our set, Stephen found a parking spot created by God right next to the venue, so we stashed the gear and headed to the home-cooked community pot luck lunch, which apparently the volunteers go all-out on and it was quite delicious. 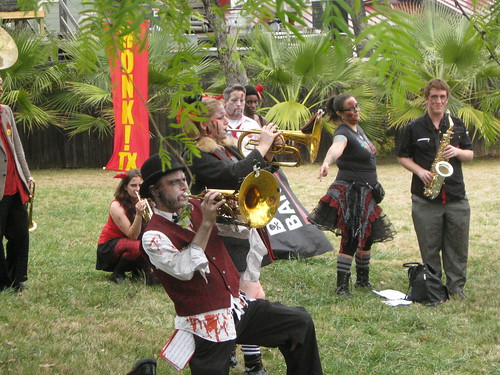 In the afternoon we watched other bands perform including the Yes, Ma'am Brass Band, Bucharest Drinking Team, and a local Austin high school band that was great. We played an hour set at 4pm and it was very well received. Afterward we relaxed on the Spiderhouse patio and had some beers. 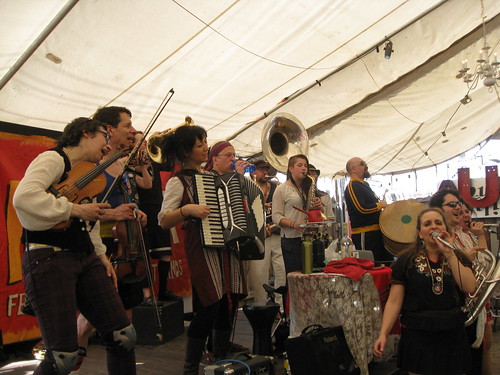 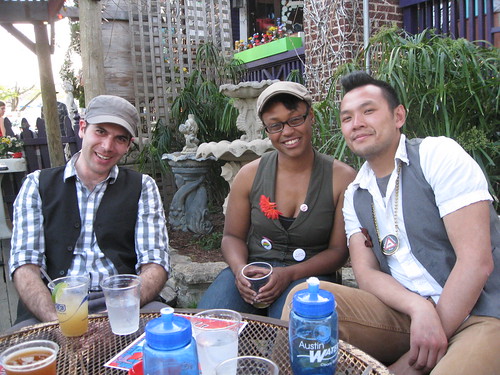 Saturday evening was another pot luck home-cooked dinner and we hung out and had a good time. I think we eventually biked home for a rest before heading to the Russian House to play a late gig from 11 to 1. The Russian House manager (a 9' tall Russian woman) was very supportive of Honk!Tx and had bands playing their Fri/Sat/Sun.

Sunday we biked over to the park where the parade started. As things go organized Mike and Ian made a clutch burrito run and got everyone breakfast which we scarfed down immediately prior to stepping off for the parade. We paraded a big rectangle and then hung out in the park all day while bands played 8-minute sets on the main stage. We followed Emperor Norton and joined forces with them for one tune before playing out mini-set. The crowd response was very positive and I think there were enjoying the pretty wide variety of musical styles bands played. There were traditional songs from Oaxaca, pop tune covers, Balkan folk music, an arrangement of Holts's "Mars", Second Line New Orleans music, etc.

After our set and hanging out at the park drinking the "Beauty Tonic" moonshine one of the bands was giving out we heading downtown to Stubb's BBQ before our relatively early Russian House gig/jam. This ended up being essentially the after party and musicians from many bands showed up and jammed in a massive and massively loud group. 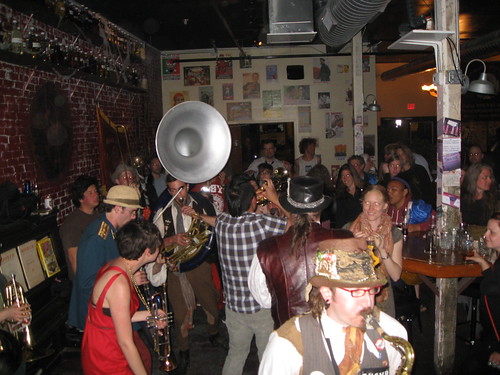 Around 10 PM the CEO of my company, who lives in Austin, and the founder, who was visiting, showed up. I had not met either of them in person before. They sampled some of the bar's signature infused vodkas and we chatted a while before Mike and I had to bike home.

Monday I returned my loaner bike with the busted chain and walked to East Village Coffee to work for the morning. Shaun stopped by briefly as well. I walked to downtown to Progress Coffee for lunch and worked the rest of the day there. That was my favorite of the 4 coffee shops I tried in Austin. After work Monday I went to meet my old Opsware co-worker John Rogers at The Gingerman for a beer. He has been living in Switzerland for several years so I probably haven't seen him in person since 2006 or so. I hit Hut's Hamburgers for dinner and then took a bus south along Lamar to my friend Andrew's apartment where I would stay Mon/Tue.

Tuesday I took the bus up to Flipnotics coffee and worked there in the morning. I hit Mesquite BBQ for lunch and then worked the afternoon from Austin Java (across the street from Flipnotics). Definitely too many free-wifi-guilt coffee/tea drinks were consumed that day. After work Andrew and I walked along the lake a bit, hit Whole Foods, and then walked around the UT campus a bit before turning in. Andrew gave me a ride to the airport early this morning and I worked from home after I arrived.

Overall, this was basically a band geek's dream festival and just the tiniest taste of rock star glamour. All of the musicians were really fun, friendly, and goofy. We had our share of surprises and adventures, too, with Alice's trumpet and Steve's tuba having problems in addition to my bike chain breaking. However, Stephen found a hundred dollar bill in his thrift store shirt pocket, which was great! I liked visiting Austin a lot and feel like I got to see most of the key neighborhoods. It was much colder at night than I was expecting so I could have used another layer of clothes but was mostly fine with my windbreaker.