So I haven't been blogging very frequently. I blame this primarily on the somewhat cumbersome process I have to make these posts. One of my tech side projects will be to make that lower friction, but that project isn't at the top of the queue just yet, so it will probably be a while. I guess it's been nearly a month since my last post.

So there were a bunch of rapid-fire events in mid-December. Sadly my downstairs roommate had an incident of heavy drinking plus Ambien plus bi-polar disorder issues. If you want details, I can tell you the story in person, but in short in the middle of the night Thursday Dec 13th after watching the Geminid Meteor shower out on Davidson Mesa with Ashlyn, my roommate had an episode of hallucination and delusion accompanied by repeated falls due to intoxication, and I had to call 911 and he was eventually hospitalized for his own protection. He was out the next morning, and once I got through the rest of that busy weekend, I had a talk with him and he moved out the following weekend. It was pretty scary at the time, but it's over now.

The next day Jasmine and I played some duets at the Phoenix Asylum open house which was fun. Saturday was dress rehearsal for Sunday's Aircat student show. I did my first solo aerial fabric piece, and it went really well. The performance itself went perfectly to plan, and overall the show was pretty fun and high quality and I think the audience really liked it. I'm hoping some decent video was recorded but rumor has it perhaps not so much. We'll see.

I also sat in with Janis Kelly's Global Soul Experience for a Solstice gig at Shine that Sunday night. It was fun, but it was completely without rehearsal (for me), so I was winging it which is always a bit stressful.

I was glad to reach a point of quiet after those performances and getting the roommate situation resolved. The rest of the year I kept my calendar pretty clear and used the time to regroup and re-prioritize.

My holiday visit back to NJ was a lot of fun and filled with continuous gluttonous feasting. I gained many pounds but I'm already well on my way back to an acceptable level. We drank egg nog with Maker's Mark, had delicious roast beef, turkey, cookies of all varieties, chocolate torte, corn bread & bacon stuffing, homemade cranberry sauce, and on and on. It was great to visit briefly with my two adorable nephews who are now 3.5 and 1.5 years of age and super fun. 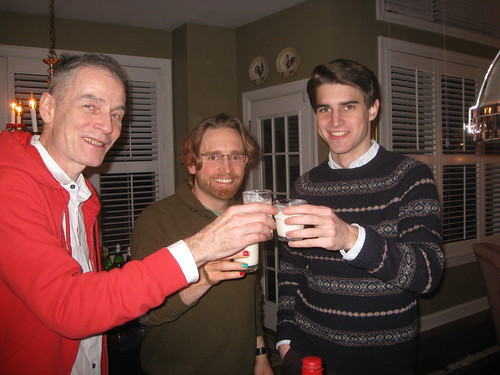 Work has been going great lately. The team is getting into the groove and I'm really enjoying the project and our technology stack. I'm working this week on more disciplined use of the pomodoro technique and trying to experiment with alternative routines like no email/web until after lunch and so forth. We'll see how it goes and whether I can stick with it or not.

I'm planning to most likely take a hiatus from aerials and get back into climbing and fitness classes at Boulder Rock Club. Tonight was my first time there in well over a year and it was really fun.

Afronauts have not had any luck booking gigs in December but it looks like we'll have at least one in January and one in March, probably some more. I'm also planning to work some more on jazz transcriptions and using my looper pedal.

It also looks like I might have some fun gigs with another band including a trip to perform in San Francisco, but that is just being established now, so we'll see if it materializes.

I think I can pretty confidently say that my fall slump is over and my mood has been much better lately. I feel like I've been single for quite a while again now and might put some energy into seeking romance over the next few months. We'll see.