Wow, hard to believe it's been more than three weeks since my last post. The rest of June was I think also enjoyable and pleasant despite the oppressive heat and the fact that the state of Colorado set itself on fire in numerous locations. The week of the 18th on Wednesday Jas, Andrea, and I got together to rehearse in the evening. Andrea and I played some Klezmer duets on clarinet. I hadn't played my clarinet in ages. I was sounding pretty terrible but it will probably improve if I get back into it.

On Saturday the 23rd the Afronauts had a party at Eric's farm. Eric invited a bunch of out-of-town friends to spend the weekend in Colorado and treat them to a live performance of his band. It was blisteringly hot though, and as we were setting up at 4pm the sun was dead center overhead and not a spot of shade available. It was a bit tricky logistically, but we eventually did play a set. Frank Roddy from Atomga was also there and sat in with us. As the sun set, the mosquitos came out in force as we were in the middle of a huge grass field with a pond nearby, so we eventually surrendered to the bugs and packed up in haste.

Sunday I went with Logan and Constant up to Evergreen to mountain bike the Three Sisters trail. It was a really fun ride and I enjoyed the trail. It was of course very dusty since we have had no rain this whole summer. 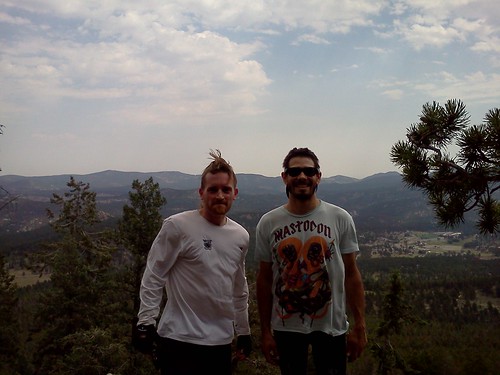 After the ride we went into downtown Golden to hit D'Deli for delicious sandwiches. This is Logan's #1 sandwich place in the world, and I have to admit I was impressed. The went went to Golden City Brewery for beers. I walked, and Logan rode his unicycle, balancing his sandwich and soda one in each hand. 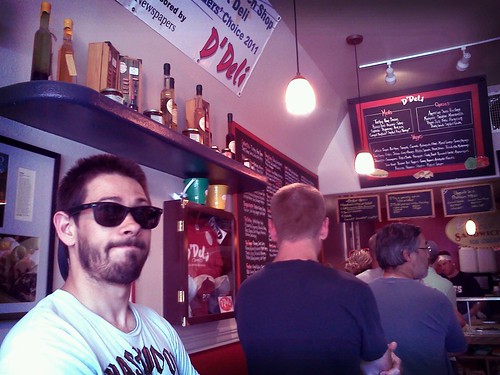 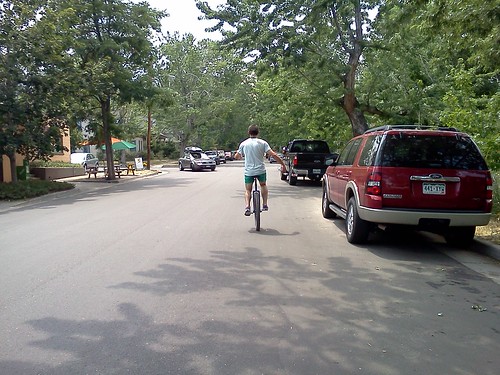 After that I went to Andrea's as she was hosting the Circus of Illumination celebration cast party BBQ. I helped set up a bit and made some grocery runs. Andrea made Banana Puddin' which was completely delicious and addictive. Most of us were unfamiliar with it, although she says it is very common at BBQ pot lucks in the south. Jasmine made dates stuffed with goat cheese and wrapped in bacon. It was a lot of fun, although there were really only about 8-10 people there and I was expecting more like 25.

Monday Andrea and I worked on juggling before CATS workout where she did acrobalance and I did fabric. We were able to do a "flag" pose together, which is pretty fun. Then I had a nice night bike ride home and Andrea left town on Tuesday for a wedding in Salt Lake City. Tuesday we had a good Afronauts horn sectional. Thursday we gigged at Cervantes in Denver opening for AfroZep, which was not a good gig and has been discussed at length since then, so I won't go into details here. However, we did have a good meal beforehand of southern comfort food across the street at the Welton St Cafe featuring mac and cheese and various deep fried things.

Friday Jasmine and I went on a hike along Dakota ridge and had a picnic dinner outdoors, which was quite lovely. Saturday I did a bunch of consulting work. I've taken a very small consulting gig sort of as a professional favor and been helping a charity get some open source personal health record management software up and running. It's pretty interesting work for now, but more hours per week working on computers is not really what I need at this point. After that, I really wanted to get outside, so I put together a mountain bike ride with Logan and Lewis up Spring Brook Loop, which was fun. Sunday was another CoiL celebration BBQ, this time up Four Mile Canyon at Gala's house. Here I presented Joe and Jasmine with the antique circus mallets the troupe got for them as tokens of thanks for all of their months of hard work. 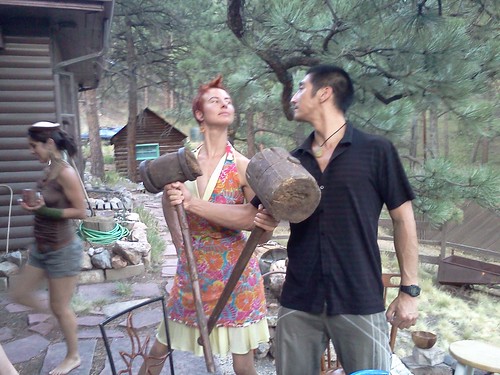 This past Monday I did my home high intensity interval training workout. It now includes ballistic clap push-ups, handstand push-ups, and windshield wipers, so it's getting pretty damn tough. I can't go all out for the 20 second intervals on some of these things, which means there's room to get stronger. Tuesday was a good Afronauts rehearsal where I introduced some new group exercises at the beginning, which I think were well received and will continue. We did some long tone exercises and a long rhythm exercise where everyone was playing percussion.

On Independence Day I headed up to Frisco pretty early in the morning and hiked Mount Royal. It was very very steep. At the top I bushwacked around looking for alternate routes down, but after desceding a few hundred feet it was clear there was no viable alternative. I had to traverse a bunch of steep and loose terrain and gradually try to gain elevation to get back to the trail. It took a while and I started to feel some uncertainty about my confidence to trail blaze, but after about 30 minutes I was able to find a place with stable enough soil and low enough slope that I could get back up to the trail that runs along the ridge at the top, and I was back on my way. Then it was off into downtown Frisco to watch March Fourth Marching Band play the Independence Day parade. I met up with Brenda and some of her friends as well. We watched M4 play the parade and then they played one set at the pavillion in the town center. They are still one of my favorite acts to see live. 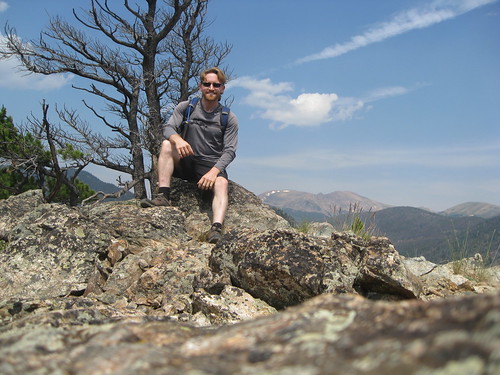 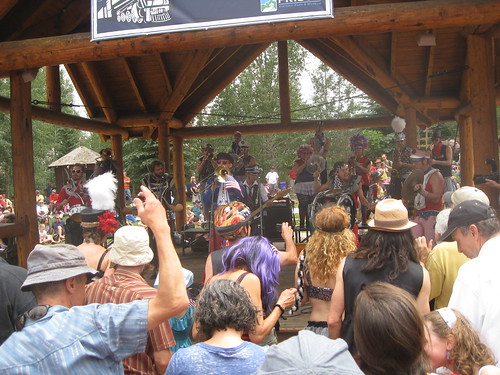 After the March Fourth set, I took a nap in the car and then attempted to bike along the Frisco Pathway a bit. However, my legs were completely zapped from the steep hike up Mount Royal, so I turned back after just a few miles. I stopped at a Tea counter along main street just before they closed to get a mocha boba black tea, which I think was the most delicious boba tea I have ever had. I wanted the caffeine for the long drive home, as well.

After I made it back to Boulder I met up with Joe Ramas from CoiL at Peet's coffee for a post-Apogaea debriefing and interview. It was interesting to hear some of his perspectives on the show and the leadership/experience style he chose for that particular occasion. He's your typical atypical Boulder guy. Super smart rocket scientist physicist who also does music, acrobalance, and a bunch of other awesome things, besides being a really nice guy and a big contributor to the groups he is in.

Thursday it was back to work. I took my car into the shop for a free oil change and car wash and worked the afternoon at the Scrib coworking space. It ended up being a super productive day and I worked on 8 or 10 different tickets. I tried to attend the BoulderJS meetup but the organizers didn't show, which as dissappointing. I'm glad my period of being a meetup junkie is over. I'm leaning now much more toward allocating my time toward creating things vs consuming/learning.

Friday morning I worked intensely at home and then went into Boulder to meet up with Tim Francis, his friend Doug, and Uncle Bill for lunch at Aji. It was great to catch up with him and hear about his new baby and Pat's new baby. I worked the afternoon at Dojo4 and had fun briefly visiting with the Dojo4 ninjas. I worked as late as I could, finally excusing myself to get up to Longmont in time for sound check at the Dickens. We ended up having a good crowd that danced through the entire show, didn't leave during the set break, and cheered continually for a while until the manager came backstage to tell us it was OK for us to play an encore. Definitely one of the more appreciative audiences we have had in a while, and man, it couldn't have come at a better time. The Afronauts have been in crisis mode for a few weeks. I hope to resolve things within the next few weeks, but tensions and frustrations are high right now.

Yesterday and today I basically stayed home and cranked away on my todo list. I did some more consulting work, spent several infuriating hours battling a Rain Bird Maxi-Paw (designed by Lucifer) lawn sprinkler rotor, rearranged the furniture in my office, raked and mowed the lawn, biked to Home Depot to pick up some stuff including the specialized proprietary wrench you need to remove a Maxi-paw rotor (Rain Bird, you can fuck off and die for all I care.), some spackle, and some efficient light bulbs. I swapped in some compact flourescents in the fans in my office and bedroom and got a fancy colored LED bulb for the bedroom. It can do white light for reading or various colors for entertaining.

Today I completed the first deliverable of my consulting project, cleaned the house, had some conversations with members of The Afronauts, and am now headed into the studio to practice my piano part for Sabia. I had a local pianist transcribe the Morelenbaum/Sakamoto arrangement of Sabia. Jas, Andrea, and I are going to play it. I'm going to attempt to play the piano part. The intro and outro might be too difficult, but most of the tune is comping chords in a simple rhythm that seems like it should be doable. It's a gorgeous tune, and even Jeremy the guy I had transcribe it was saying how beautiful the performance is. I'm looking forward to rehearsing it when Jas comes back from Aspen in two weeks.