Spring is rather quite fetching

Oh, it's such a lovely spring day today. A bit windy but otherwise delightful. This morning my new assistant arrived with an electrician and a handyman for some long needed home improvements. Finally my promiscuous garage door opener that opened when neighbors both in front and behind me used their remotes has been replaced. I got a bunch of light switches fixed up properly and some new hooks in the exercise room for my gymnastic rings. All this happened while Michale and I made banana chocolate chip pancakes and played bananagrams. Also, my dog run got its first real use. The electrician Dave had a big German Shepherd named Deuce in his truck. So I offered to put Deuce in the dog run. Michale and I went and played fetch with him for a while in the back yard. He escaped the dog run a few times by pulling the door open, but eventually Dave tied it shut with some electrical wire and all was well. Deuce also got to meet my neighbor's Golden Retriever puppy Bella.

Then we went to the Boulder Farmer's market and for a walk and picnic up Boulder Canyon. Then we came home and took a long nap until Michale kicked me out because I was done napping and fidgeting too much - thus I'm blogging our day so far. Oh and the Ice Cream Truck just came down my street, which is what motivated this post. The Ice Cream Truck rules. Michale didn't hear it so I'm going to surprise her later with an Oreo pop. Oh and on that note, for the last 15 months or so I've been under the impression that I was lactose intolerant, which is a major downer, but now that has come under suspicion after some trips to the doctor. So I had some baby swiss cheese on my sandwich today, which they gave me for free since I bought so much turkey. I haven't had swiss cheese in a really long time and it was probably in the top three of my all time favorite foods, so there was much rejoicing.

Oh yeah, and last night we went to a friend's house for game night featuring Outburst from 1988 and Egyptian Rat Screw. And Michale made me a hat! 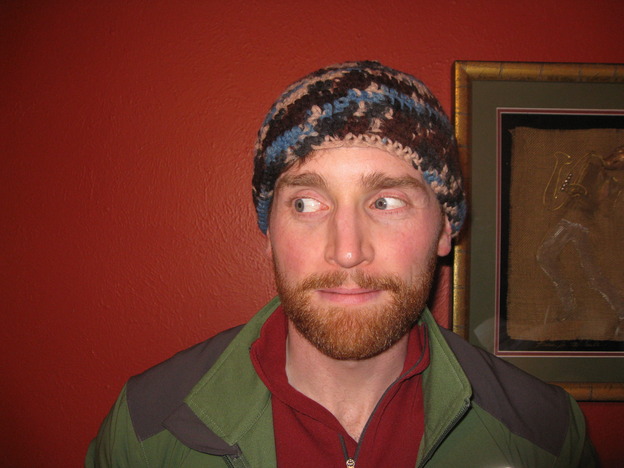