Band Thanksgiving on Saturday was a blast. I hung out with Marc in the afternoon as he made his final preparations. I was impressed since he had all of the cooking done well in advance, so he had plenty of time to just relax with a G&T and wait for the guests to arrive. Mrs. Mare would be proud. He cooked two turkeys and all the fixings. It was great to see all my old band buddies again and hang with their wives and young children. After the feast, the three girls ages three and seven put on a dance show for us consisting of a few rehearsed moves and lots of improvisation with audience encouragement. As would be expected, there was a fire going strong outside on the patio so we sat around and talked well into the night. 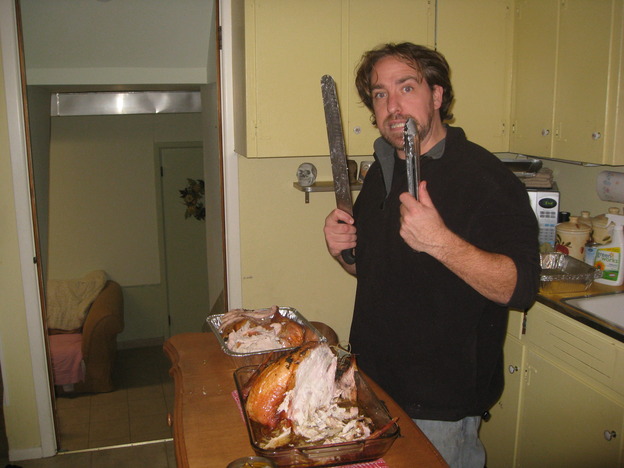 Sunday we took Sunny and her friend Ajahnay to Miller's Luncheonette in West Long Branch for some real deal New Jersey diner brunch featuring lots of pork roll. It was great. Of course our plan was to head directly from the diner to another huge meal at my parents' house but that presented us with no worries. That afternoon my Mom made spicy pasta with sausage and meatballs and we ate an early meal "pronzo" style. Monday and Tuesday I worked from my parents' house. My mother's side of the family was all in the area, so we did a triple header with a big restaurant dinner Tuesday, more pasta at Mom's Wednesday, and Thanksgiving at Aunt Elizabeth's. It was a mighty onslaught of food.

Friday I drove with Chris and Tina up to Poughkeepsie NY to spend a day and a half with them. We had another big Italian meal Friday night then watched V for Vendetta (which I had not yet seen). Saturday we went car shopping with Tina who was unfortunately a victim of a high speed rear end hit and run while stopped at a red light, which destroyed her car. We went to a yummy Japanese place for lunch and under Chris's guidance I ordered my first legitimate meal of sushi roll. I had a "Black Dragon Roll" which was shrimp tempura down the center with avocado and cucumber and topped with eel. It was fantastic and I had to close my eyes while I chewed the large pieces and savored the flavor combinations. It took 31 years for my palette to be ready for that, but it's totally there now, and it was great.

Sunday Tina made chicken saltimboca and we played a deadly-serious game of Jenga. We surpassed the 30th "Master" row and spent at least four solid rounds convinced that the tower would surely collapse on the next turn before making it all the way to row 34, 2 away from "expert". 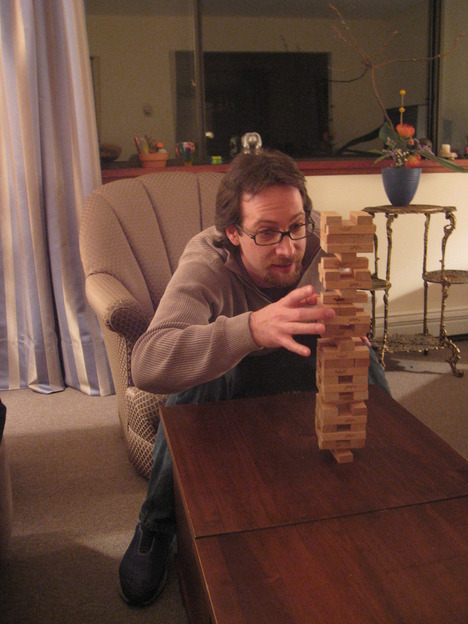 Sunday was a driving and visiting extraveganza. I drove down to Long Valley NJ to visit with Kate, Steve, Meghan, Tim, and Pat. We hadn't seen Tim and Pat in quite some time so it was fun to catch up with them and their wives. We all played with baby Will who is a ball of energy and enjoyed the contrast with Meghan's daughter Maeve who is perpetually still and yawning on the verge of sleep. After that I drove to Cranford and met up with my high school buddy Rich at our old hang out Tony's Pizza, still going strong in Cranford. Then I drove down the shore to record an episode of "The Jersey Shore Podcast" with Joe P and Dan P.

In the evenings and when I could find a few minutes I had been rummaging through all my old stuff stored in my parents' basement. Monday it was craigslist to the rescue again as I hired a woman and her son to spend all morning furiously packing boxes, 24 in total, to be mailed media rate USPS to my new house in Colorado. Soon I'll have my beloved Queen posters displayed again!

I almost missed my flight today due to struggles locating the Enterprise rental car return lot, which is an "off-airport" lot at EWR on highway 1&9. I can't believe they expect visiting drivers to venture out of the airport into the evil rat's nest of 37 highways that converges around Newark airport. It's a maze of 100-yard 2-lane merges and exit only lanes forming a cruel game for the inexperienced drivers my Dad refers to as "Stay Out of Downtown Newark". Everyone loses at least once or twice. However, I was able to eventually get to the lot, return they smoke-smelling, manual windows and doors, 10 gallon fuel tank crapmobile and take the shuttle into the terminal. But I had to check a bag since I was bringing my soprano sax back as my carry-on bag (or hand luggage as the Brits say) and then after a long delay due to an unmanned X-ray machine and a troupe of about 5 elderly folks in wheelchairs that were pushed to the front of the line for reasons I don't quite understand, I made it through. I hurried to my gate only to see a big sign reading Ft. Myers. D'oh. Gate change. Then I had a few hundred yards to run to find the nearest gate display and of course whenever I fly Newark I'm looking at no less than five miles of foot travel to my actual gate, so I had to run from C94 to C127, arriving about 6 minutes before takeoff. However, there was some major back up with these folks getting into their seats so a queue had formed in the jetway and it took a while to get everyone seated.

I'm flying back to Denver now and looking forward to hanging with friends this week. Tomorrow is another Paul Mags moonlight hike, which should be fun.