OK, I think it's time for a random stream of consciousness blog post! The bulk of December has passed and things have been humming along nicely. Work is very busy as I am at the helm of a big project and we're running behind schedule, so I've been working long hours to try to keep things moving forward. But the project is "my baby" per say so I'm motivated to do it and get it out there, so I'm enjoying it. I went up and skied Breckenridge two weeks ago just to try out the resort early season. This is the first time I've had a full season pass, so I figured I might as well get out there. It was pretty good, but things will be better later in the season. Plus Lewis will be around this year and Elise has Friday's off so I'm hoping to ask if I can work Sun-Thu during ski season so I can ski Fridays. We'll see.

Climbing is going pretty well again. I've been to three different gyms this month with four different climbing partners and have been getting back up to my personal best. I attempted another 5.11a but was defeated. Hopefully I'll conquer it next month. Speaking of which, I'm planning on doing some personal training next month, so hopefully I'll make some fast progress with that extra help. Yoga has also been going pretty well and I've been practicing fairly steadily this month (except for a few days when I got sick), so that's been nice. It's time to learn a new set of asanas though.

I had a bunch of fun dates with Michale this month including a big breakfast I cooked here for her and the Pizzis, dinner at Bill's, a birthday party at a friend's house, a CHAOS pot luck, Avatar, and a few others. So that's been fantastic. My dental woes are complete now I think and I'll hopefully enjoy a full year before having to go back again. I'm still feeling some anesthetic wear off from today's filling triple header.

All the stuff I shipped out here did make it out although it was an adventure getting it at the post office. I had to make three trips and wheel out a giant cart to my car to get it all. Much of it was pretty banged up but it all made it out here. I set Maggie to work on the big project of assembling somewhere on the order of 700 CDs where the discs, linear notes, and jewel cases were all separate. She and her husband worked on it for about fifteen hours. She's researching some shelving options and I am very much looking forward to having full access to all my CDs once again. 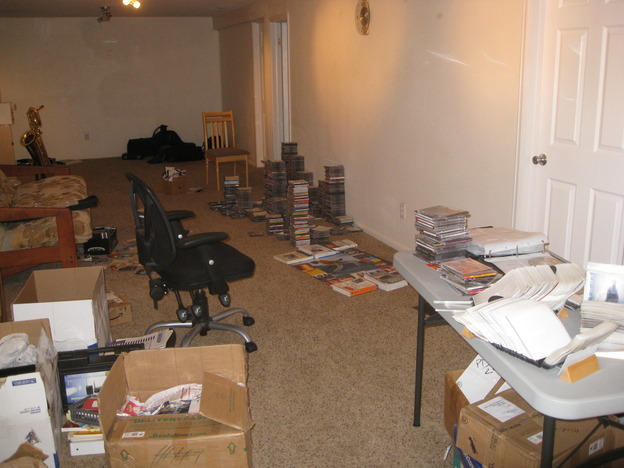 Almost all of the Christmas shopping is done now and I fly out to NJ Wednesday for a brief visit, then back here on Saturday and on the slopes Sunday.