Well, Burning Man 2009 was even better than last year, thanks primarily to finding a really great camp. Here's the account.

Coordinating transportation was a bit tricky. I was going to rent a car but my rider bailed and then I had a few different ride shares. I eventually found a guy in North Boulder who bought a 1976 Winnebago Tasca just for the burn and had space for passengers. So Saturday night I took my stuff over there and loaded up the gear. We were supposed to leave Sunday morning around six. Despite my self-declared mastery of all alarm clocks, I failed to set the alarm on my new atomic clock alarm clock correctly. I overslept an hour and then scurried over there as fast as I could. The RV gets pretty poor gas mileage, and we actually ran out of gas about 1/16th of a mile from our first gas stop. Oops. Other than that the ride was pretty smooth and comfortable. It's a real treat to be able to lie down on a long road trip.

Sunday night we stopped at a truck stop somewhere east of Lovelock, Nevada for a very surprisingly good final hot meal. We continued on to Fernley, the final decent supply stop on the way to the burn. One of the RV batteries wasn't working right and we got a jump from other burners. The gas station was full of them and had huge extra stock supplies ready to go. I was hoping to just camp and sleep but Darrell was anxious to hurry up and wait on the entry gate line, so he drove through the night to get there. Of course this is just about the worst, most crowded time to drive up 447, so we sat in tons of traffic, often at a dead stop. We got into the actual playa gate line around 4am. As the Sun rose, the party started, and burners started getting up on the roofs of their RVs, doing yoga, drinking, climbing on cars, and generally getting excited. It was a fun vibe. Tommy and Darrell broke out the playa wear and scotch. There were lots of cute and playful playa bunnies wondering around mooching drinks. 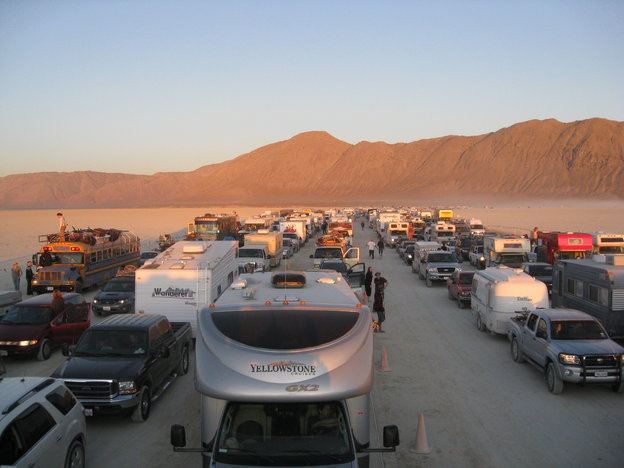 We finally got through the line around 9am after waiting five hours. I drove the RV through the gate and to our camps, which by coincidence were about 200 yards apart, which made things very easy. Right away I started helping with the last bits of set up for my camp Astral Headwash finishing the plumbing up and setting up the shower. My own shelter went up pretty quickly which was good. We did a few initial head washes on Monday to test the plumbing for leaks and then opened up for business. I tried to take a nap in the afternoon (I couldn't really sleep in the loud old RV rumbling around through construction zones and rumble strips), but I mostly just lay there sweating and praying for sundown. In a very rare event, we actually got a few sprinkles of rain on Monday late afternoon, but it only lasted a moment. I hunkered down in Center Camp for a while watching bad interpretive dance. Is there such a thing as good interpretive dance?

Tuesday I did a nice yoga class at HeeBeeGeeBee Healers. The What Where When guide book had some poor information layout, so it listed yoga as 9am to 10am, but many people thought it meant yoga and 9am AND 10am, so there were twenty-some folks standing around waiting for a yoga instructor. So someone volunteered to lead the class and it was actually quite nice.

Following yoga, I went and played in my personal record for largest game of duck duck goose. I counted around 140 participants. They were hoping to break the record of 243, but it didn't happen. It was still pretty fun and people were in to it. A few good crashes and chases. Tuesday afternoon I went and worked some. The first person whose hair I washed got to use my nice brand new definitely-lice-free brush and she walked off with it! Later I cruised around the deep playa on my bike. In the evening I went to watch Phil and Liz, my camp mates from Astral Headwash, perform Aerial Silk at center camp. 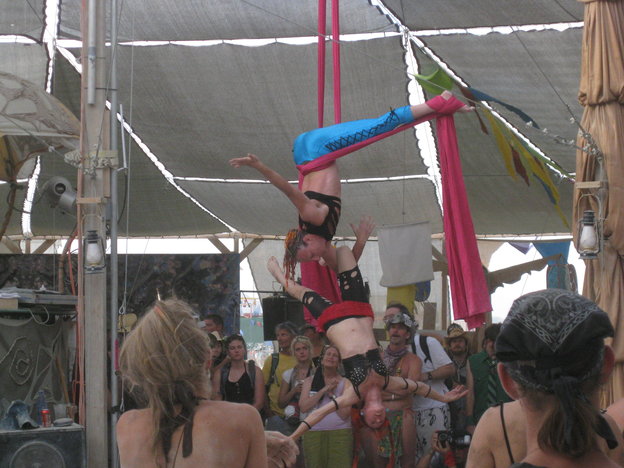 Wednesday was my first official work day, which started out with a run to Artica for ice for the camp. Then I washed a bunch of heads and ran the welcome table for a while. Astral Headwash is a great camp. The desert is a really hot, dry, windy, dusty, harsh environment. Burners line up long before we open and wait over an hour to have us wash their hair in nice cool running water. People absolutely love it. We get lots of moaning and marriage proposals. It's super fun. After work I took a nice shower in our little camp shower. That's another great benefit of being in a camp with hundreds of gallons of water (about 200/day) and huge evaporation ponds: you can get your hair washed as much as you want and take a few showers without having to worry about packing out your grey water. So nice. One of the burners whose hair I washed also gave me a tank top with built in nipple tassles that I made good use of a few nights. Wednesday night I saw some cool performances at the Robosapiens dome and did lots of biking around the playa and some dancing here and there. 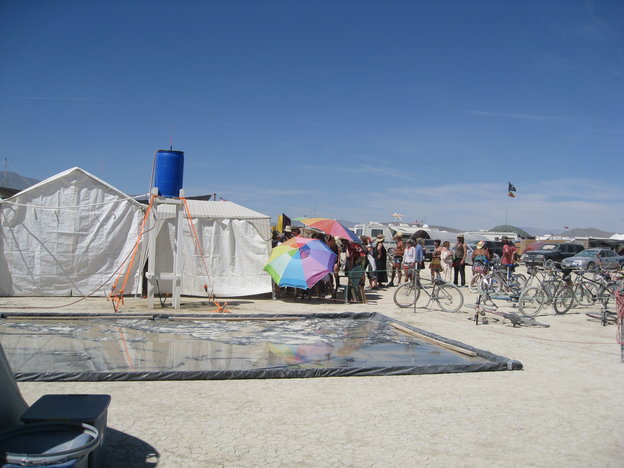 Thursday I hung around camp a bit in the morning then headed over to the Black Rock City Roller Girls camp to get bashed with shoulders and hips by roller derby girls. 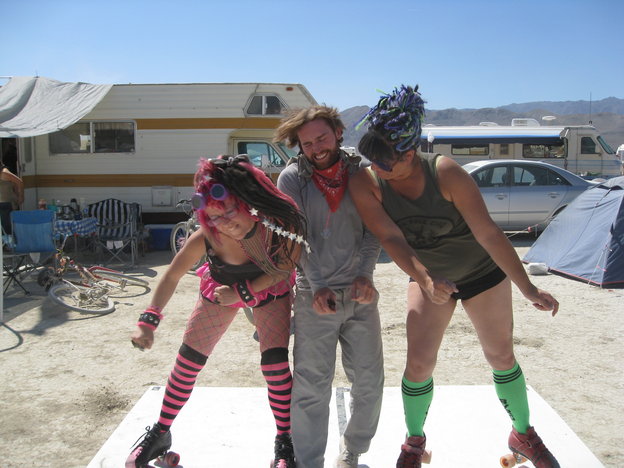 In the afternoon I found Marah at Culture Labs and relaxed and chatted a bit. Then I did some nice yoga at Wisky and Dust (the Denver folk) then headed to Black Rock Roller Disco to watch the Roller Derby match. Gotta love the ref fights! I did some dancing at Robosapiens dome in the evening. 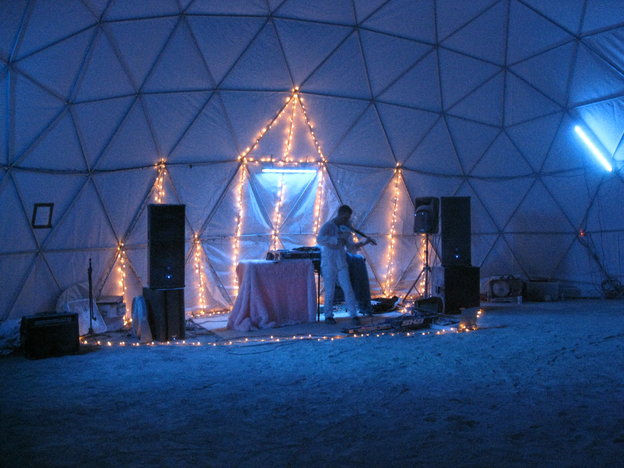 Friday was another work day at Astral Headwash. After work I did some yoga at Wisky and Dust then spent most of the night in Center Camp watching aerial silk, ballet, and the battle of the marching bands. Watching the Black Rock City Ballet do a modern dance duet to the Bach Cello Suites was very intense. I have seen a lot of modern dance and been mesmerized it, but it is a vastly different experience when you are at eye level with the dancers just fifteen feet away. At this intimate distance, I could see the constant struggle for balance as the man lifted and moved the woman. It made the experience much more affective and moving. Such great strength and balance used to achieve elegance and grace. They also did the second annual Battle of the Marching Bands, which was all around great. The bands were Environment Encroachment from Chicago, who don't do much for me, Titanium Sporkestra, a very quirky punkish percussion group from Seattle, Orchestra Zirconium a more traditional brass based marching band also from Seattle, Gamelan X, a Balanese Gamelan group from the Bay Area, the Burning Band (Burning Man "Official" Marching Band), and of course March Fourth Marching Band from Portland. The Emcee Steven is just great. He wears a great drag costume, has lots of funny quips to make, and actually makes very perceptive commentary on the performances. He's really got it down. The Burning Band is just about the most rag tag group ever. They stumble out onto the stage, mill around a bit, talk amongst them self about what song they are going to play, then someone starts playing the melody (mostly drinking songs) and they all honk along and wonder around. It's pretty amusing. Gamelan X was actually really great. The music is just so different but so great. They have tons of beautiful cymbals and tam-tams and the whole thing is full of great rhythm and delightful clanginess. Of course, March Fourth totally rocked and stole the show. They did a third round tie breaker, but March Fourth had the crowd won over and everyone spilled into the stage to dance. It was good timing for me since I had been dressed that evening by Tara in some fuzzy pants and a shirt that had built in silver wings under the arms, so it was the perfect garb to stand out a bit while dancing in the crowd. Lots of fun.

Saturday I mailed some post cards at the post office and did some logistical hunting to track down a ride back to Boulder and get someone to take my place in the RV. We spent the morning tearing down Astral Headwash and explaining to a few unobservant burners that we were not in fact washing hair today, and pointed to the mostly disassembled camp as evidence thereof. We had excess water to spread around the playa so Craig grabbed a hose and before long had a gaggle of topless women in front of him getting sprayed. I want that job next year. In the afternoon I went with Phil and Liz to the Autosub dome and they gave me an introduction to aerial silk. It was a lot of fun, and I was able to leverage my upper body strength from climbing (although you need certain other muscles as well) and did a few fun moves. It was tiring though and hanging by my feet, arm pits, and hips left some bruises. In the evening I mostly chilled in camp and chatted with my camp mates. It was very windy both Friday and Saturday nights, so it wasn't clear if and when the man would burn. I was pretty worn down by now so I just hunkered down in my tent early and skipped the burn. I did wake up and see from camp while he was still burning, but I was in no mood to venture out into a thick crowd in a dust storm. 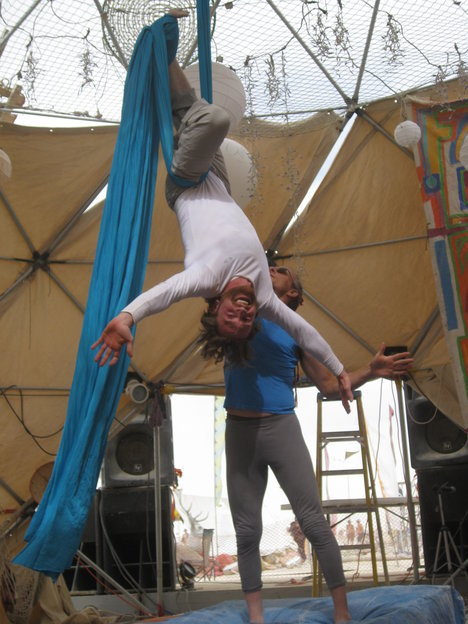 Sunday we did the final tear down and packing of the camp, and when Kori got back from exploring the deep playa, we headed out in her Subaru for Boulder. It took us two and a half hours to get off the playa onto 447 and five and half hours to reach Fernley. We eventually stopped in Lovelock to sleep and take the all-important quasi-religious first post-Burn shower.

Overall the burn was even better than last year. First, I was better prepared and knew what to expect, so I spent less time in shock and awe. Mostly it was how great Astral Headwash is and the great gift we gave to the community. I'd love to camp with them again next year if they'll have me back!