So after a 48 hour medical delay today I flew out to San Francisco. My tolerance for air travel grows increasingly low, but I managed to get through it. I got the rental car and made my way to Pat's apartment in the Mission district without any trouble. We chatted a bit there, admired his fetching neighbor across the way who was hanging out on her balcony, and then headed out in search of yummy food. We found a tiny El Salvadorian restaurant that had delicious tamales and popusas. Pat thought it was so good that as we got up to leave he wanted to come right back. Then we hung out in Dolores Park, listened to Michael Jackson blaring on a boom box, and watched cute skinny girls play Frisbee.

We headed on over to the Pirate Supply store just before it closed, which I found to be not particularly entertaining. The we wondered into a new shop in the neighborhood specializing in just honey. The proprietress was a very chatty woman with bright red hair who fed us lots of delicious honey samples, including some fennel honey, eucalyptus, cactus and local honeys. Pat and Rebecca each bought a jar. Then it was back to Pat's where we hooked up with Marcia and Rebekah and Rebekah drove us around on a local's guided tour of "Significant and Insignificant" things. It was quite fantastic. She showed us the big hippie grocery co-op, where all the best night clubs were for any given sexual orientation, all the various strip joints, famous restaurants, the best taco cart, chinatown, little italy, etc. She drove us up and down some really insane hills including the famous Lombard street.

After that we hit Urban Burger for fuel and went back to Pat's to eat and chat and comment on his lack of furniture and attempt to sit comfortably on his partially inflated air mattress. I drove Rebekah and Marcia home and then made my way down to my swanky hotel in Sunnyvale where I will stay this week. It was a very fun and enjoyable time. Pat's crew is a bit obsessed with some random internet video of some dude tripping on acid and ranting about random things that come on TV, which is where the title of this post comes from. I think it's this one.

OK, it is promising to be a very fun and productive week out here. A few reunions are also planned. Further bulletins as events warrant. I took some good and funny photos, too, but on a borrowed SD card since I (again, sigh) left mine at home in the laptop, so I'll have to post those later. 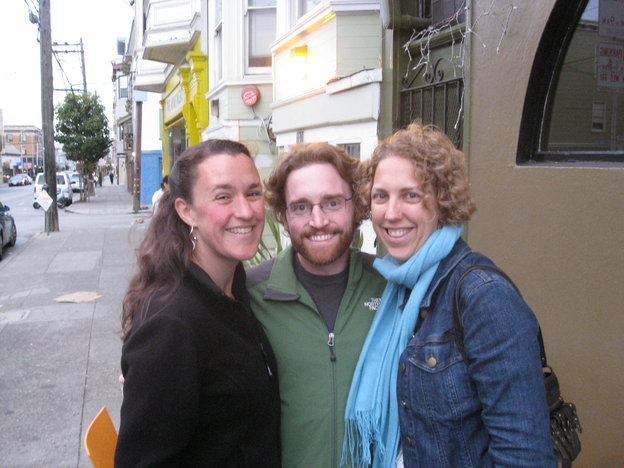