This past week at work was fun and exciting. I got to see a lot of old coworkers that I haven't seen in over a year. I also finally met in person some people I have been working with for almost a year as well. There were lots of fun and yummy lunches and dinners. Monday I went for a jog with Bernie and Matt at Baylands Park in Sunnyvale. They call it a park, but where we ran was really just dikes surrounding reservoirs next to a water treatment plant. It was without a doubt the least appealing place I have gone jogging. The air was stagnant and reeked of numerous nauseating stenches. There were tons of flies in the air. At points I needed to cover my mouth with my hat to filter them out. Even so I'm sure I inadvertently swallowed at least a dozen flies. I still haven't received a satisfactory explanation as to why Bernie chose that spot other than they always used to run there. Tuesday I went climbing with Tedo and now I can pretty much keep up with him, which isn't saying much, but I've made clear progress. Wednesday night we had a reunion of four early Opsware black belt consultants and it was fun to be all together again and catch up. Thursday there was a reunion of old Loud Cloud and Opsware folk (many of whom had already left by the time I joined) at Blue Chalk in Palo Alto, which was also a good time. Memorable quotes included the following: 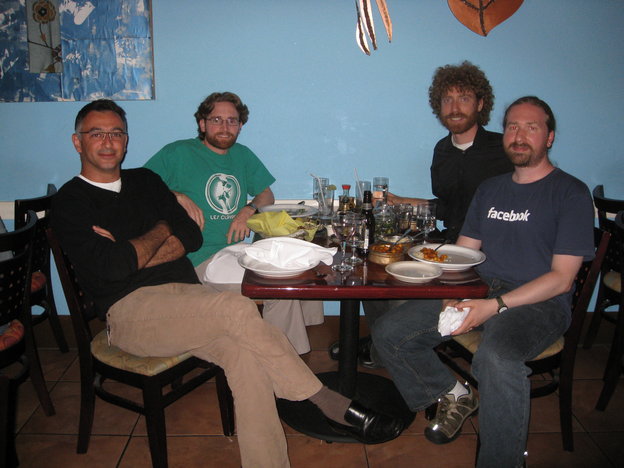 Work wise the week was very busy with lots of meetings and trying to take care of my normal job responsibilities in the small cracks between meetings both scheduled and informal. However, the really fun and exciting part was Bernard and I were secretly cooking up a prototype of migrating my main feature (bare metal OS provisioning) from our current architecture to our newer architecture. I generally worked from 8:30 to 6:30 or so, went out and socialized until 9:30 or 10:00, then came back to the office and coded until 2:00am. We got the whole feature working end to end including a fancy flex based GUI and the back end in one week and ready for a demo to an eager audience at 8:30 am Friday. The demo went great and the audience, who didn't know exactly what they were coming to see, is now (mostly) supportive of giving us the team we need to fully productize it. It's pretty cool since I have been working on this feature for about three years now and this will be by far the biggest change to happen under my watch.

Thursday there was another, bigger Opsware reunion attended by a bunch of folks who left Opsware before I joined as well as some folks I worked with that have since left HP. It was good to hang out and chat with them for a while. Friday I picked up Ed at Google HQ in Mountain View and we dropped off my rental car at the airport and took the BART back into the city. Sara joined us for dinner. After much uncertainty we decided on a sushi place that is highly regarded. Sara is vegetarian and Ed was unwilling to try the fish, but I ordered two pieces of the special they had and found it pretty good. Not amazing but I can see the potential and will try some more in the future.

Saturday morning I wondered out of the apartment and found the panhandle and Golden Gate Park. I did a 4.6 mile run around there and was feeling quite good. I'm not sure if the sea level altitude still makes a difference after a week, but my cardio was able to do it effortlessly. It was a cool feeling to pass some flatlanders huffing and puffing while I'm breathing like I am taking a nap. I think that run or the one Sunday morning were probably the furthest I have jogged since I usually quit after 3.5 miles or so. It feels like without too much training I could work up to a half marathon, so I may do that at some point, but probably not soon.

Saturday afternoon I hung out with Ed and Sara and Pat in The Haight. Ed and I had some delicious brunch and then we hit a record store, the Bound Together anarchist book store, and the People's Cafe. Pat and I went over to join up with Marcia and the rest of the crew for dinner at Marcia's. It was fun to hang out. Marcia's crew is pretty darned enthusiastic about their lifestyle, and it's amusing to be around them in their element. After dinner I washed dishes and the girls went to get into costume for their night out clubbing (panties, mouse ears, big purple boots, etc). One of Marcia's roommies Ivan came down into the kitchen to eat his dinner so it was just me, Pat, and him there. So we started talking and he had is laptop with him and was lamenting that it was broken and wouldn't boot. We asked what was wrong and he explained that he had been messing around with dual booting Windows Vista and Ubuntu Linux and had deleted some partitions and left his machine unbootable with a grub error 22. Pat and I exchanged an amused glance. The coincidence here is pretty funny. I explained to Ivan that Pat and I were each high level Linux sysadmin gurus and we probably had about 10,000 hours of linux administration expertise between us. It's just funny. He wondered down into his kitchen for dinner and two strangers who had the precise obscure skills needed to fix his laptop are just standing there. So we made pretty short work of his problem, re-installing his grub boot loader using the GNU parted recovery CD he had used to cause the damage in the first place. This left me amused for the remainder of the night. This is probably second in line of my all-time tech rescue stories after the time I talked Cody at The Kitchen through brining his entire network back up after a power failure over the phone. 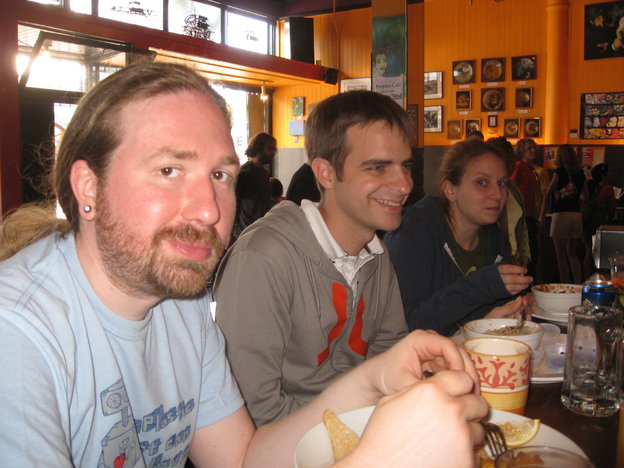 Then Pat and I went back to the Mission district and found a Mexican place still open. Pat didn't eat much at Marcia's because, as he described it, the food they cook consists primarily of "nuts and berries". So he had some nachos and felt satiated. Then I got a map from him and walked the 3.2 miles from there back to Ed's place in The Haight. It took precisely one hour. It was a nice night and I got to walk through some interesting neighborhoods.

This morning I did another run in Golden Gate Park. I saw disco roller skating, which I absolutely adore, as well as people setting up a sound system for outdoor swing dancing. Then Ed and I went back to the People's Cafe for food and on to a quick driving tour of Pacific Heights and wandering around Fisherman's Warf briefly. Then off to the airport for the short and pleasant flight back home.