Wow. Super fun weekend. Friday Erin and I met up with Elise's crew at Lazy Dog for the tail end of Happy Hour. Then we grabbed some quick but tasty Tibet dumplings and scooted into the theater just in time for Public Enemies. Sadly it was crowded so we ended up forced to take the only pair of seats left in the front row. I thought the movie was a bit blah and too long. Hard to comment otherwise since we were mostly craning our necks to look at pores - the cinematography featured a lot of extreme close-ups of faces.

Saturday morning I met up with two folks from CHAOS and we drove up to Estes Park and climbed the Jurassic Park area. It is really, really gorgeous up there right now. Beautiful black water of the mountain lake, lush green pines, alien rock formations. My partners were wondering if the drive was worthwhile for me since I had to be back in Boulder just after lunch to make it to the music festival, but I was really pleased just to spend a bit of time there. I did get three climbs in and we were in the shade for two of them, which was nice.

Then I drove back home for a quick shower and meal before driving out to the Mile High Music Festival. I wasn't sure I was gung ho about an all day affair, but it actually turned out to be really great. The vibe in the crowd was a lot of fun. It was really hot, and the headliners were hard core bands Tool and Widespread Panic, so it was lots of heavily tattooed and pierced girls in bikini tops and cut off denim booty shorts. The festival had a waterworks thing that was spraying the crowd with water, which was nice. I stopped and kicked a hacky sack for a while with a group. We were joined by a girl in a white bikini top, tons of big tattoos on her back, booty shorts just barely staying up, and converse. Her friend was in a long black dress which she hoisted up a bit to expose her converse sneakers when it was her time to hack. Their guy companion could hack impressively without spilling his completely full beer.

I only caught the tail end of Galactic, which I wanted to hear and sounded good, but it was just so much driving and I wanted to eat a big lunch at home so I wouldn't need to buy much expensive food at the festival, so I missed most of it. I did hear some of Greyboy All Stars, who had two great songs and the rest so-so, G Love and Special Sauce, and Incubus. However, the surprise hit was Indie Arie. I have her "video"/queen song that I really like and it's her big hit, but the show was great. After a terrible and delayed sound check, they finally got rolling and she spoke for about five solid minutes (of a 45 minute set) because she was upset and needed to get through it in order to put on a good show. She grew up in Colorado and went to school in Denver, so it was a home town crowd, but apparently she doesn't gig much in the area. Anyway, her family was there to see her but she said her brother had gone out to the parking lot to get his cell phone charger and been arrested for scalping tickets, so her mother was at the police booth trying to get him discharged so they could make the show. She was pretty upset. So she wanted to sing a brand new song she wrote yesterday called "Life Is Good". The musical director and keyboardist knew it, but the rest of the band didn't. So the two of them quickly taught the gist of the song to the band and backup singers and then they immediately performed it. Pretty gutsy for a huge festival show! Anyway, that song was good and the audience joined in and then she did her big hit song as she was now feeling better. The crowd really liked the show and the authenticity of her performance. It was a nice and unexpected treat.

Then I moseyed over to the big stage to claim some ground for the Tool show. I haven't seen them live and I had heard they put on a great show, and they didn't disappoint. Of course I was pretty darned far back, but at least I didn't need earplugs, although it was still super loud. The visuals were great and of course the crowd was totally into it. By now it was dark and the heat had given way to a perfect temperature. They played basically a "greatest hits" type set list, which was cool. Maynard James Keenan also had a funny comment after the first song. "Tonight's performance is brought to you by the cool, refreshing taste of ..." then a long pause. Is he doing an endorsement? Man I thought Tool was way above that stuff. "... boobies. .... Say what you will. Everybody likes boobies". 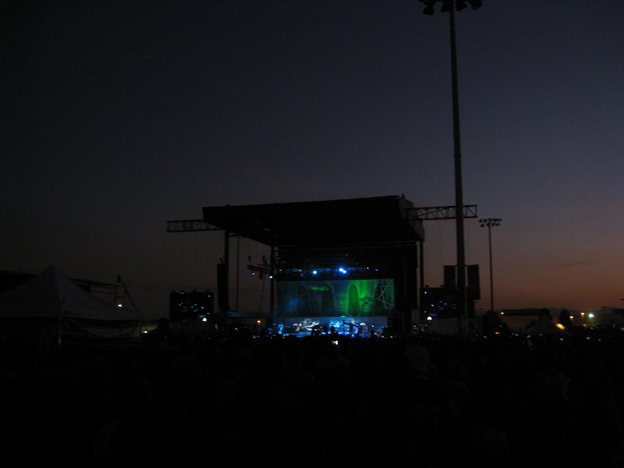 Today I went and again biked Sourdough Trail, but this time with just Erin. It was again very challenging but fun. We went just a bit farther than last time. The plan was to go until the point at which I had turned back last week, but focusing on the trail I rode right past it without noticing, and only on the way back was I like, oh, here's last week's turnaround spot. We probably did an extra mile or so. Then we grabbed some yummy Snarf's sandwiches back in Boulder and sat on the grass behind Boulder High and enjoyed them after pedaling up those monster hills all morning.

This afternoon I finally got a much needed nap. I have acclimated to another Colorado lifestyle aspect: I now get up earlier on weekends (6:30) then I do during the week, and I generally play longer days than I work (I was out "playing" from 8am to 11pm on Saturday). Anyway, the new mountain bike and the bike rack are working out great. I'm also loving the Rogue car. I've made great use of the extra space for bikes, furniture, people, tubes for Boulder Creek, shopping until the cart is full at Target, etc. Overall I'm really pleased with it.