Thursday night was the inaugural rotisserie chicken attempt. As I found in my real estate dealings, the instructions that were readily available were far from comprehensive. I managed to basically get the things on there OK, but I was soon facing large flare-ups in the grill such that I brought a fire extinguisher up from the basement. However, once I turned off the three middle burners, leaving only the side two, that seemed to quiet down. Sadly after about 20 minutes the spit had fallen out of the motor, but luckily I think I caught that within the first few minutes. Then later it seemed like the rotisserie sections were unscrewing and collapsing in the middle, which was going to be a big problem. However, it seemed to hold out and when I eventually disassembled it after it cooled there was still many turns to go before it fully disengaged. So in the end the chickens turned out quite tasty. However I made two whole chickens expecting around twenty people for the CHAOS pot luck, but only five showed up, so now I have tons of chicken. I brought a big container over to my neighbor's house as well. 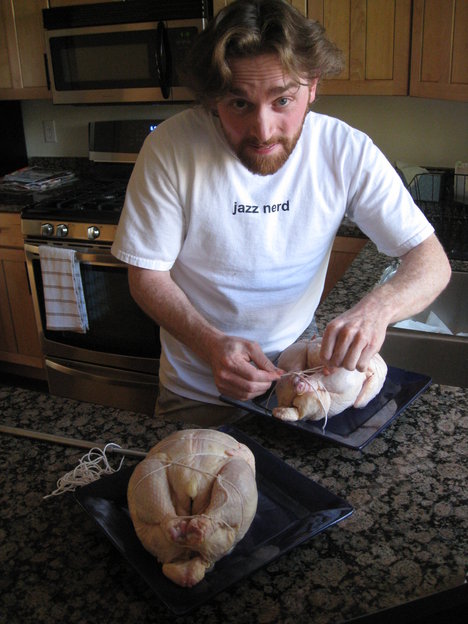 Today I went up to Fort Collins and did some fun mountain biking in Lory State Park and Horsetooth State Park with Jaz. The trails are nicely maintained and of moderate difficultly, which was a nice change from Sourdough. Jaz got a flat when we were pretty darned far from the trail head so we ended up pushing our bikes quite a while until the second tube donated by kind passing cyclists actually fit and worked and we were gleefully back in action. Then we had yummy sandwiches at the pickle barrel.

This evening I attempted some chocolate chip cookies but they came out pretty crappy. Not sure if it was the recipe or the altitude or what. They are still edible though.