Wednesday morning I did my final yoga class (core) at Yoga Union two blocks from Bernie's place. Andrew and I grabbed a yummy lunch at Detour Cafe and then did the short drive up to Seattle. In Seattle, we met up with MoJo for dinner and conversation, which was very jovial and enjoyable. Then we motored on up to the Canadian border. The border crossing was more eventful than I expected. We crossed at a small border crossing along Route 539. This is a strange place to cross, I gather. The reason we were doing so was immediately before getting in the car in Portland, we did priceline for a hotel in Vancouver. This got us a good rate, but at a Super 8 hotel about 45 minutes east of Vancouver. So we arrived at the border crossing at 11:51 pm, and it was lucky because apparently they are closed between midnight and 8 am. I think there's a weird thing when you ask a question with the context of "are these people a threat?", the way you hear the answer is a bit colored by the context. Anyway, we explained to them that the two of us (scruffy 30-something males) were on a road trip from Colorado planning to visit Vancouver for two days. The agent remarked that coming all the way from Colorado for a two-day visit was unusual, and we explained that we had spent time in Portland. This combined with the fact that Andrew has a California driver's license even though we said we are both living in Colorado, combined with whatever other suspicions they had, caused them to have us pull off to the side and go into the office for some further interrogation. So a very friendly Canadian patrolman asked us a bunch of questions, punched us into their system, and then went and searched the car for about ten minutes. Then he gave us directions to our hotel and sent us on our way.

Thursday we spent pretty much all day exploring the various districts in downtown Vancouver on foot. We hit a bunch of different cafes and malls. We got another lucky timing break when we went back to the car around 5 pm to get some water and asked the attendant when they closed, to which he replied that the gates close at 6 pm, which we hadn't noticed, so we narrowly escaped having our car trapped overnight. Andrew remarked that overall Vancouver does have a very NYC feel to it, with just a touch softer edge. It has similar density and layout. The Chinatown district is pretty big and there are several large asian communities. We also walked through numerous blocks that were really sketchy and had lots of sketchy looking folks standing around on the sidewalk. In the evening we made our way to the quite nice Granville Island neighborhood and had a very yummy dinner of some crab cakes and pot stickers at The Sandbar restaurant. Then we watched the Ultimate Improv Championship at Vancouver Theatre Sports League. 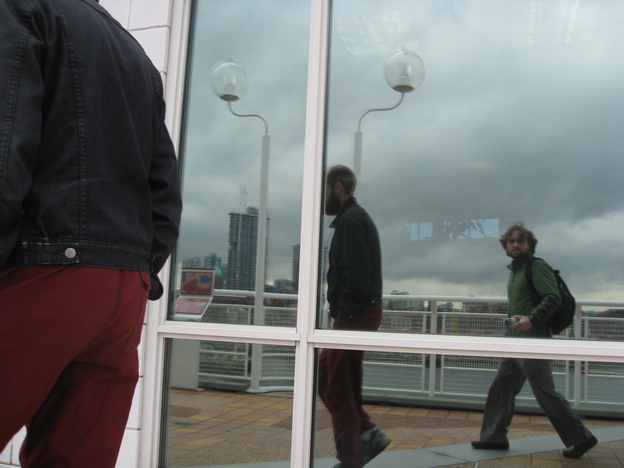 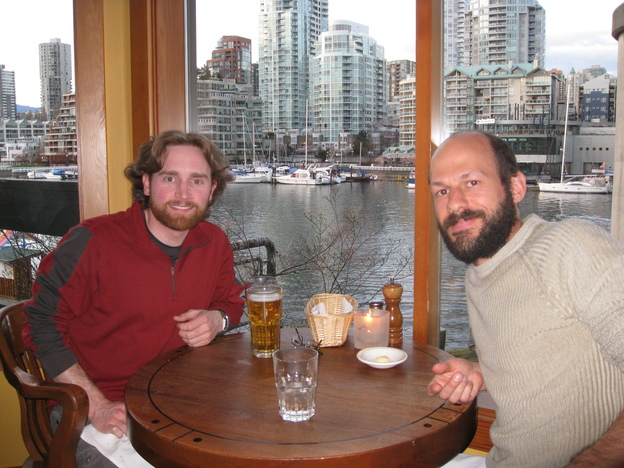 Today we ate some Vietnamese back in Chinatown (ish) before driving up to Cypress Provincial Park, intending to go for a hike. However, after some napping and then driving further into the park our elevation put us above the snow line so hiking was not so good. We considered doing the Capilano Suspension Bridge, when we thought it was just a bridge, but it turned out to be an expensive theme park experience, so we bagged it. Instead, we walked the Varley Trail in Lynn Canyon Park a bit before another drive into the city, eventually settling on Subeez, which was pretty good, not amazing.