Ha ha! Burning Man 2008 has been achieved! How fantastic and weird and wonderful. On the drive out there I passed through Las Vegas and drove in bumper to bumper traffic along The Strip, so I had a chance to at least have a peek from the car. These days my hatred of traffic is so intense that when it didn't seem like I would be able to easily park anywhere, I just kept on going.

On the way out there I passed through Goldfield, Nevada, which is one of these weird little towns that I find so odd and interesting on my long drives. There were some cool vintage vehicles sprinkled around as well as some crazy art cars that some guy builds by gluing thousands of random trinkets to busted up old cars. Very strange but delightful. I also took my highly anticipated no simple highway photo of me on my car out in the middle of nowhere. This is to match a similar photo a coworker of mine took on his cross country wondering trip in 1991.

I arrived in Reno around dinner time. The plan was to finish stocking up on the last few essentials, then wait around for the rest of the Freedom Community folks to arrive, and then caravan out to Black Rock City together. In the Reno Wal-Mart there was a very clear distinction between oblivious regular Wal-Marters and hordes of burners stocking up. You overhear some funny conversations at this point. Anyway, I got my final water and supplies, gassed up, had one final real meal at Boston Market, and then waited around. However, I never really saw any other Freedom Community folks, so at around 11pm I got sick of waiting and headed out to the playa. It's about two hours drive out there plus another two hours in line waiting for admittance to Black Rock City, so I arrived at my camp around 3am. Upon entering the city, the greeter gives you an info packet, and if it's your first burn, makes you perform a snow angel in the playa dust then ring a giant metal bell, then you can proceed. The bell is struck with a steel spike and it was the loudest sound I can remember hearing, and I've heard some loud things. I knew I was to be made to roll in the playa, but I didn't realize this would happen immediately and then I'd have to get back into my car. That really sucked because the car was in theory the "dust free" zone and as soon as I got back in there it was completely coated in dust.

Once I found camp I parked and temporarily set up my tent planning to find a more official location and stake down properly in the morning. In the morning I relocated a bit but then went off to help with various camp setup things. However, by late Monday morning we had our first exposure to a serious white-out playa dust storm. My tent still wasn't staked down at this point, so I had to quickly get a few stakes in, secure everything, then go take cover in the dome. The white out lasted pretty much all day, and by the end my tent was full of dust. So this was kind of a bummer but at least I got exposed to it quickly and reset my expectations. You can't do anything in a dust storm without dust wrecking it, including trying to prepare food or even open your food container. After dark it settled down though and I was able to get properly staked down. No shade structure for me though. The cheap-o one I had brought would be no match for these winds, so I didn't even bother. I had already seen one tent hurtling down the playa at 30 mph.

Tuesday through Friday were gorgeous and still though, which was fantastic. The initial dust storm had me pretty pessimistic about lasting a week, but everything is much easier and no big deal when it's calm.

OK, so what was it like? It's hard to describe. I think I'll give you three things. The standard one-phrase answer to what is Burning Man is "Disney land meets Mad Max on acid". The second thing I think is to just list stuff I did or saw to give you a sense of the variety that is there.

Free roller disco set up in the middle of the desert

Steam bath project. Little hut with heated rocks and steam where you go to sweat off all the dust and sunscreen and baby wipe residue.

All manner of massages, yoga, body work at the Hee Bee Gee Bee Healer village (they are based in Boulder).

Roving diner that serves grilled cheese all night from a different place each night.

Clinch Fighting class at Debase camp. I learned how to apply and defend a body lock and the Muy Thai clinch.

More yoga classes than you can attend in a day.

Screening of Flash Gordon with cookies and chilled milk. This movie is so freaking amazing. I hadn't seen it in a while and I forgot how fast paced the action is. Go Flash!

Woman in post office makes me sing her "Jingle Bells" before she'll mail my postcards.

Techno music. Everywhere. Loud. All night. Till you puke.

Hopefully, that gives you some idea. For me, the one moment that really captured it was when I was climbed up on the Death Guild's Thunderdome steel geodisic dome. So there's a camp called Death Guild that for the past ten years at Burning Man have built a big geodisic dome (a popular structure on the playa), rigged it with two bungy-cord harnesses, and hosted battles where two combatants beat the crap out of each other with padded bats. Now, this whole thing is entirely drenched in Mad Max. Everybody is wearing some form of leather BDSM type gear. Lots of dyed black hair and dreadlocks on the women. Lots of nipple rings on the men. It's pretty fantastic. But the best moment was the second fight of the night. Pushed through the crowd lined up to fight are two college age goofball guys in matching ketchup and mustard costumes, and they are ready to rumble! This is what it is all about. So for me, to sum it up in four words: "Thunderdome: Mustard vs. Ketchup". 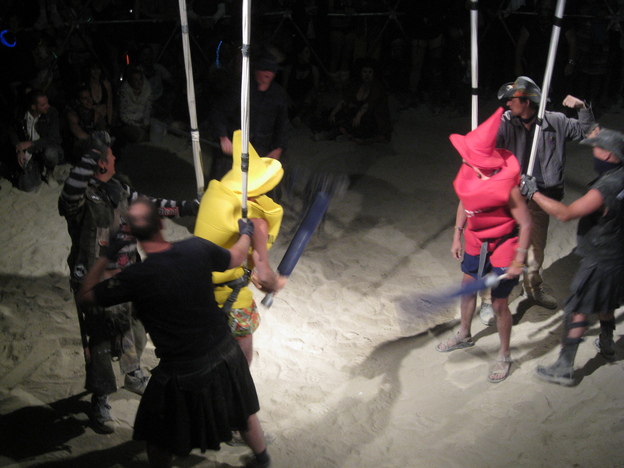 Other notable events include the Battle of the Marching bands in Center Camp. There were five bands including March Fourth from Portland, who kick ass. Also, on Thursday a bunch of folks from my camp designated as the "First Unitarded Congregational Chorus" sang back up while The Wet Spots, also camping at Freedom Community, performed.

On Wednesday night the kick-ass funk band Albino performed in an amazing huge saddle-shaped amphitheater. It was a great concert, but the fringe benefit was that once they had the amphitheater set up, they just left it up even though there weren't any more official events. So I went in there to practice saxophone and rest very often for the rest of the week. Thursday night after midnight I took my baritone in there and was playing for a while. I was feeling particularly inspired and improvising freely. Folks in their full glowing costumes would stop and listen for a few minutes and then wonder off. At one point it was just me in there, and then I saw someone decked out with glow bracelets standing at the center. After a few minutes the shapes changed enough that I could tell it was a couple kissing. At this point I was playing some lyrical arpeggio stuff. A moment later, another couple showed up and started making out. They both stayed around for a few minutes while I improvised. It was really fantastic. It could very well have been my most satisfying performance to date.

Even though Marcia was not camping with us in Freedom Community, I did manage to track her down knowing only that her tent was amongst the hundreds of tents somewhere "behind the roller disco". I walked back in there and within the first hundred feet walked up to Marcia standing outside her tent. Fantastic!

Saturday was another dust storm, and I spent most of the day hunkered down in the saddle resting and chilling with Lula. 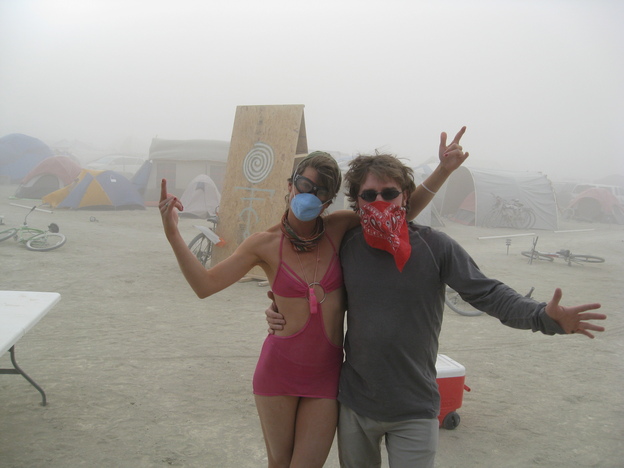 Saturday night the whole camp went out to watch the man burn. They had to delay it due to the wind, but we actually timed it pretty well so when we got there, we just hung out for about 15 minutes, then they started the fireworks, and then they burned him down. Very efficient. I was particularly lucky that I ended up in the first row of people standing after about 30 rows of people sitting, so I had a nice clear view of the whole thing. 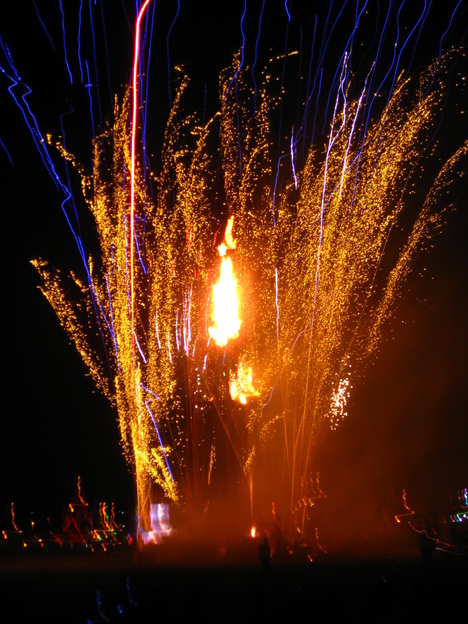 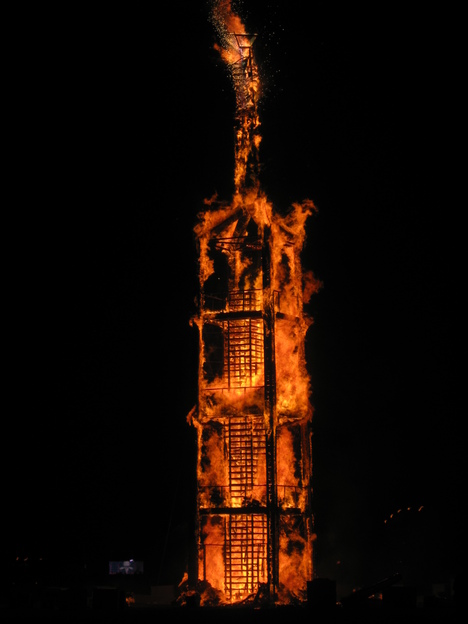 Sunday morning before dawn I started packing up to head out. I made it to Park City that night in time to rendesvous with my former landlord Gunter who was nice enough to put me up for the night and allow me to get my much-needed post-playa shower. Monday I headed to Golden, Colorado, seeing my first ever double rainbow on the way.

I'm now here in Golden way way up in the mountains at 9,000 ft. It's a good 25 minutes drive to get down off the mountain and 45 minutes into downtown Boulder. The house is fantastic though. More description and photos later this week.

The rest of the Burning Man photos, which I think in general came out really well, are here.