Today I had a fantastic mountain bike excursion. I drove down Lone Tree Road as described in my guide book and hunted around for the right place to park, which I eventually found with some directions. I parked in a small lot next to the Flagstaff Urban Trails System trail. There was one other car in the lot. A young woman was sitting in her red truck with her bike on the rack. I was hoping she would get out and be able to help me find the trail I was looking for, but she just stayed in her truck. I figured she was meeting someone there or waiting for the weather to clear up as it was cloudy and threatening thunderstorms. I took off on my bike and eventually found my way onto one of the FUTS trails that I thought I could take around to the Fisher Point trailhead. As I cruised around it started to rain, as it does pretty much every afternoon here during the July/August monsoon season, so I took shelter under the I-40 overpass, queued up Mahler Symphony No. 2 and waited it out. It cleared up pretty quickly and I continued on in the trails that were now wet, muddy, slick, and dotted with puddles.

After not too long I was back at my car and realizing this trailhead was harder to find than I thought. The red truck was gone. I headed the other direction. I knew I had to cross through a golf course community to get to the trails, but exactly how and where I was to do that was not indicated in my guide book. As I rode up the road toward the entrace to the residential section, I spotted the same red truck parked across the street, bike still on the rack, driver still inside. So I figured I'd ask for directions. The driver said she and her girlfriend had just ridden that trail last week and that it was great riding and beautiful scenery. She gave me some directions and I asked if she wanted to come along for the ride as well, since she had been apparently somewhat hesitant about whether to ride or not. She agreed, threw together her gear, and off we went.

The weather cleared up on the way out. It was some fun riding. Muddy and puddlely at first but dryer as we gained elevation. We went past the beginning of Walnut Creek Canyon, which has some cool rock formations. The last two miles or so to the point is steep enough that you have to hike for the most part and ride when you can or you dare. It didn't take Lisa long to notice my $70 Wal-Mart Mongoose bike. Of course I explained that it was just a beater that would take a lot of abuse at Burning Man, but when the chain on her fancy K2 bike started acting up and my Mongoose was working great I teased her about that.

We enjoyed the nice views and a rest at the top, and then did the fun downhill. There was some really fun terrain to coast down on. I almost crashed at one point but I managed to sort of let the bike fall out from under me and remain standing, so it doesn't officially count. Pretty much as soon as we were back on level ground again, it began to rain and then thunder and lightning, so we waited it out under a tree, discussed lightning safety statistics, and then carried on in the now even muddier trail when the rain abated. There were some seriously slippery spots that caused me to fishtail all over the place, and by now we were both completely caked with mud, but it was a blast. The plan is hopefully week after next have Lisa show me some trails outside of Sedona. 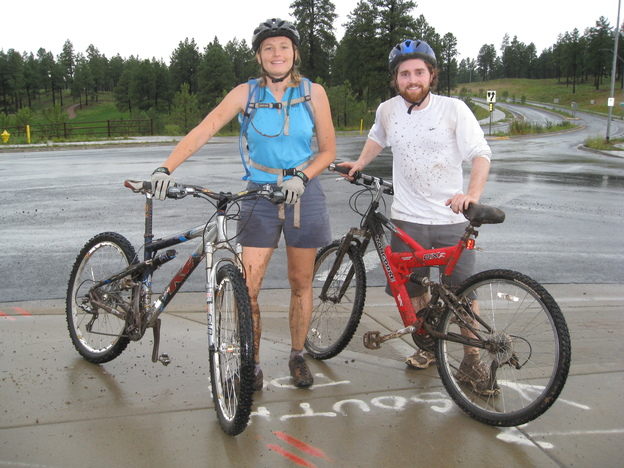 I headed back to my car. I was so muddy that I had to strip down to my skivvies before getting into the car, and then when I got home had to spend some quality time hosing myself and my gear off. After a nice shower and a quick rest, I finished the evening with the amazing George St. Pierre defending his UFC title. Then I drove out to the Fort Valley trailhead, parked my car with Laura Viers playing, and laid on the windshield watching the stars for a while. I saw three shooting stars, including one that seemed really close and had lots of detail visible in the tail. A fantastic Saturday overall.