As soon as I saw the very first vista walking up to the rim from parking lot A, I stopped breathing. 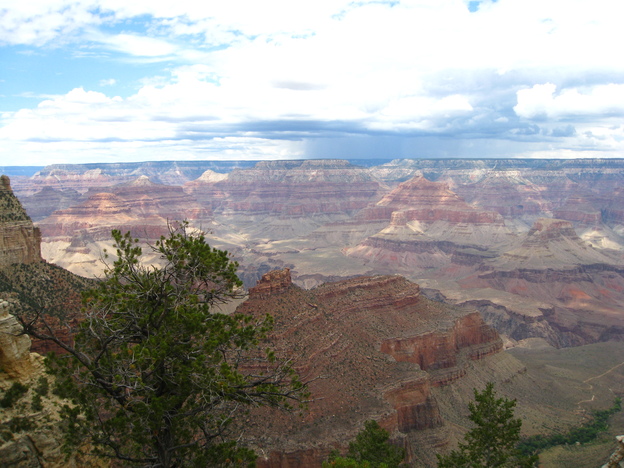 Today I hiked about four hours down into and back up along the Bright Angel Trail (listed in my Hiking Flagstaff guidebook as the most famous trail in the world ?). This is the first time I've ever really felt a desire to go camping. If I ever hike the Napali Coast of Kauai, Hawaii again, I'll do it as a 6-day camping trip instead of a one day in and out. This hike made me want to bring a tent and stay a day or two down in the bottom. But since this was just a quick day trip and I didn't even leave the house until eleven AM, I had to settle for just going about two hours or so down and two hours back. The guide books say you will spend 2/3 of your time coming back up, but for some reason (probably fewer stops to take photos), it ended up about even for me I think. 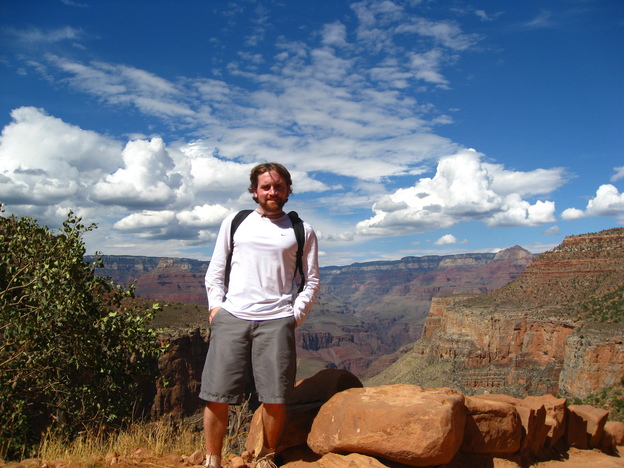 Anyway, whenever I hear the words "Grand Canyon" I laugh at this old Jack Handy Saturday Night Live sketch. I think NBC is pretty good at keeping videos off the Internet, but here's a text transcript:

In other news, my landlords left for their cross country bike ride on the 18th. You can follow their progress here.

I also want to note that the clouds in Arizona are just dazzling and spectacular. You would think I had never seen clouds before given how stunned I am at how they are here. You can always see huge chunks of sky, and there's always at least three types of clouds layered on top of each other. There are usually vast smooth bands of cloud that create a weird figure ground reversal affect with the sky. You can often see a small gray patch of rain off in one small area in the distance. I'll be posting a lot of cloud pictures.

Another amazing thing about Flagstaff is the Flagstaff Urban Trail System (FUTS). This is a network of wide dirt/gravel trails carved throughout Flagstaff including going directly into town. From my house in the Chesire neighborhood, I can bike down along Route 180 which includes both bike lanes as well as separate paved paths next to the road, or I can take the FUTS trails straight through Thorpe Park into historic downtown. It's fantastic. It's a little tricky to navigate back in the dark via bike headlight, but I've done it.

I've got at least two new sax pieces from my recent shopping that are good and a few books of nice etudes, so there's been some good variety in my practicing lately. I've also been able to play up to about ninety minutes before my chops give out, which is a big improvement. Now as long as I keep up a steady practice schedule, I don't have to have nightmares about having to stop a performance saying "I'd love to play you the final two movements of this piece, but I can't play that long".

If you are so inclined, check out the rest of the Grand Canyon photos