OK, I've been traveling around and having various adventures for a while since I've had time to post. A couple Fridays ago I packed up shop in Bend and headed to Portland. I met up with Bernie, Wyatt, and Charles for some video games at Ground Kontrol followed by some Sushi. Then the next morning I flew back to New Jersey for Alex's wedding. I hung out with Chris Saturday and we had some fantastic Moroccan food in Manhattan followed by a trip to Jack Dempsey's pub to watch some UFC with a bunch of Marines and a bunch of drunken Irishmen. Sunday we trekked out to Long Island for Alex's wedding, which was a good time.

Monday I trained it down to Long Branch to visit Thorp and the Jersey shore crew. I met Wes, Thorp's baby son, and we had some great BBQ food. I gathered the jazz nerds and played some of the Cannonball Adderley transcriptions I have been practicing for a while, which was fun to nerd-out on. Then I trained it out to Lambertville to hang with the folks a few days. 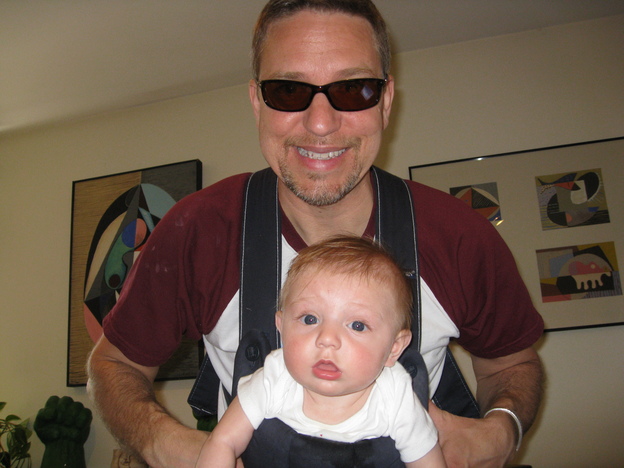 Thursday I flew back to Portland, hopped the MAX train, and met up with Bernie, who got the fun experience of driving a fully loaded green machine in all of its busted-muffler glory. Friday after work Bernie had to do some last minute housewarming party prep so I headed on bike to the Pub and Pedal. This time the Pub and Pedal was hooked up to a big parade march from the existing Voodoo Doughnut shop around town to the new Voodoo Doughnut location. There were a couple hundred goofballs assembled for this, and it was just a generally weird event. Everyone is pysched up about doughnuts, and the police in riot gear are blocking off traffic. The participants included a father/son team randomly dressed as hot dogs, a guy in a doughnut outfit, one of the owners in a shiny silver suit, and the other owner prancing around in a parasol. This one guy Trey (I think they are the owners) said this quote: "Oh, I forgot about my noise maker. I was too busy concentrating on my money maker." Local drum line Last Regiment of Syncopated Drummers provided the beats for the parade, and the local roller derby team skated up and down the paraders with balloons. 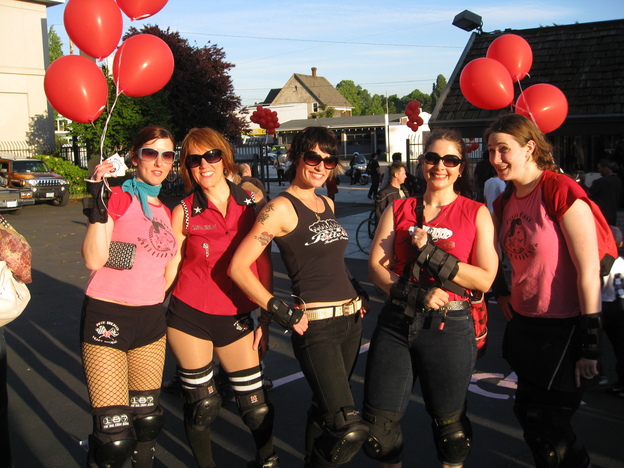 When we arrived at the destination, it was so crowded that we decided to ride back to the original store to get doughnuts, which we did, and there was no line there, so hurray for that. We grabbed a few dozen Vegan doughnuts for the party and then headed back to Bernard's, where we spent the evening. Bernie invited a few folks from the Portland Juggling Club, and eventually they ended up passing flaming torches around outside on the street. 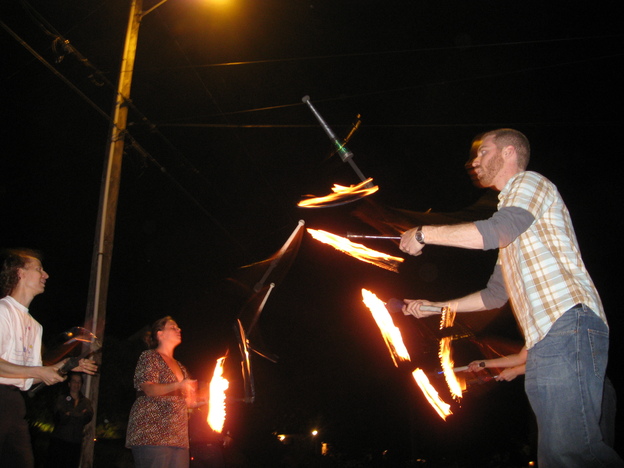 Saturday we went briefly up to Mount Tabor Park, then we helped Wyatt move some stuff into a storage unit, and then I headed out to get a jump on the long drive to Sunnyvale.