PDX with The Hawk and Big Wave Lew!

Wow, that was a totally kick-ass weekend! I left Thursday afternoon to drive to Corvallis, OR because I needed to use a special HP video conferencing room there for an all day meeting Friday.  The drive was northwest on route 20 passing through both the Deschutes National Forest and the Willamette National Forest.  It was stunning.  The road was often thrown into shadow by the dense towering pine trees rising probably around 100 feet on either side of the two lane road.  There were large swaths of dense pine forest.  Early in the trip there were a few fires set here and there I assume as part of some sort of controlled burn process, but they smelled great.  Eventually the road follows a fast running stream and the pine trees relent their complete dominance and allow in some big leafless trees with broad branches that are entirely cloaked in thick green moss.  The whole drive has a decidedly Lord of the Rings feel. 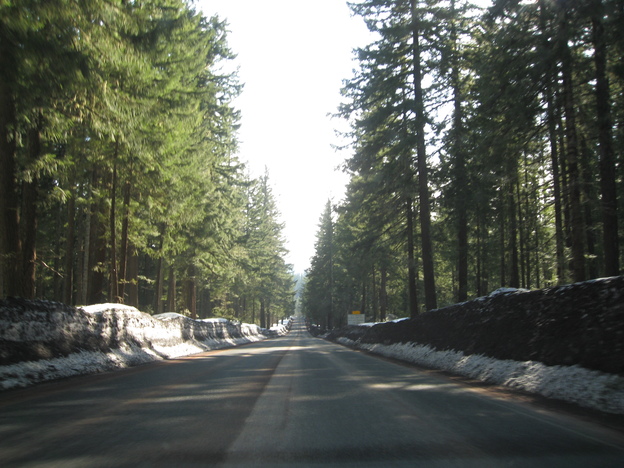 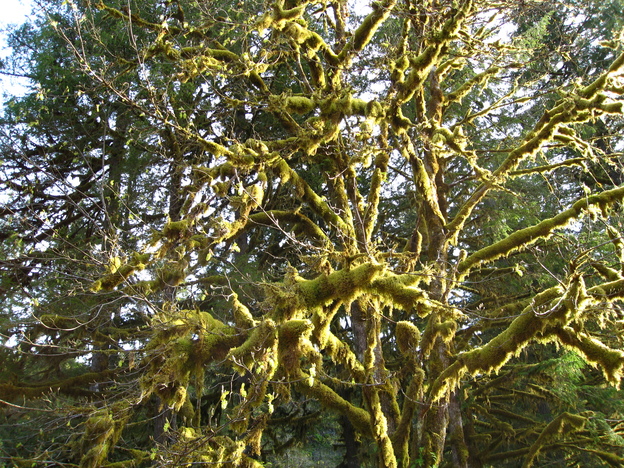 Further along there are striking sets of barren pine trees sticking out from snow-covered mountains that look exactly like hair folices in skin.  Here and there are hills barren from logging.  When you eventually start to see towns and people again, they are tiny logging towns filled with quirky trailers and small houses.  I passed several logging mills whose purpose is probably obvious even to sharp-eyed extra terrestrials.  First, row after row of piles of enormous pine tree trunks two to four feet in diameter, then a large rectangular factory building, then on the far side neat stacks of 2x4s.  Occasionally along the road people have posted enormous tree trunks as trophies.  I saw two that had to be around seven or eight feet in diameter.

In my overnight in Corvallis I had a delicious meal of Louisiana crab cakes, baby back ribs, mashed potatoes, and brocoli, all in just the right size portions.  Friday at worked at the HP office in Corvallis.  A poster on the wall in the building listed a long list of impressive technologies invented here.  At the top left was "calculator" with no qualifying adjectives.  It was fun to explore the office a bit. Having spent a lot of time in the cube farms of banks and insurance companies, it was exciting to be in a true engineering R&D facility.  There were "R&D Area: Visitors must be escorted" signs everywhere.  In one corner I found an enormous plotter printer that made me drool thinking about the network diagrams that thing can print. I passed numerous raise-floor data center rooms, and one room that was a literal "clean room" complete with the guy in OR scrubs with matching hair net and booties.  There are dioramas on the cube walls outlining the assembly process for ink cartridges.  It's just generally a cool place (at least on your first day there), and the video conferencing room was pretty slick (think Star Trek "On Screen").

I wrapped up things early on Friday to try to get to Portland in time for the Pub and Pedal event Bernie was attending.  Sadly my GPS took me to "319 Swift Pine St" instead of "319 SW Pine St", so there was a bit of a delay.  However, I made it to Bernie's new house only a little later than I planned.  Here I rendezvoused with Big Wave Lew, who happened to be in town for a science conference, which was a happy coincidence.  Bernie outfitted us with bikes and gear from his arsenal and we rolled to the first stop on the "Pub and Pedal" outing.  He we joined forces into a small bike gang and moved on to the next bar.  It was a very nice night for a ride.  Then we sat at the bar a while and got caught up. 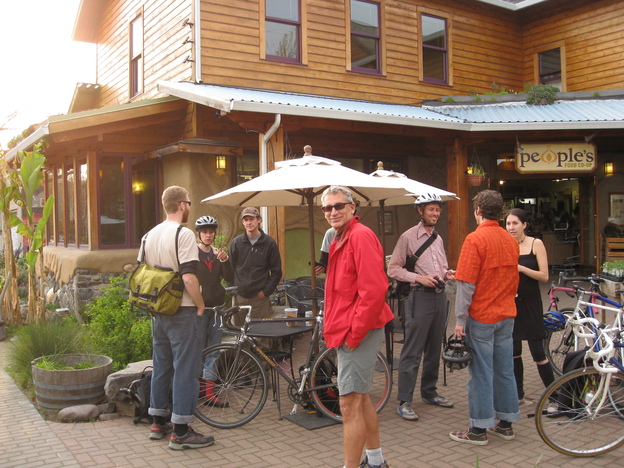 Next stop was Bossa Nova to get tickets for the March Fourth marching band show later that evening.  On the way out a woman in a big pink wig, fishnets, and panties with "GB" in a superman logo on them came out from the Mobile Groove Bomb  bus stationed outside the venue, and gave us her rap about their organization.  M4 wasn't hitting for a while so we rolled to Launch Pad Gallery  for a Brent Wear  show.  This was fascinating mostly for the people watching, but they had a bar, some snacks including fresh watermelon, and some cool pieces both in the exhibit and permanently in the gallery.  A cello trio played a set of live music after the DJ was done.

Then we headed back for the March Fourth show.  March Fourth is basically part marching band, part side show, part burlesque.  At this show there was no marching as they were on stage, but they had dancers and stiltwalkers running around and hula hooping and so forth. 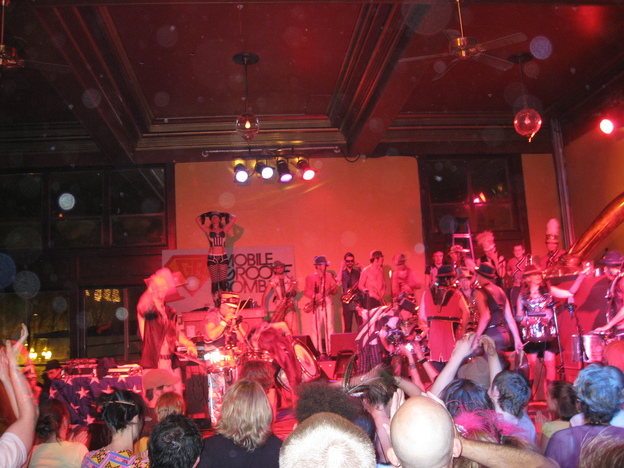 Saturday "morning" we borrowed a friend's dog and truck and drove down town to get Lewis.  On the way to the hotel we were held up by a protest march that seemed predominantly about marijuana legalization with a small anti-war contingent.  Bernie says this is a fairly common sighting.  We grabbed Lew and headed to Washington Park  where we had some lunch on the benches in the Japanese Garden and then went on a long hike around the trails in the park, crossing over into Hoyt Arboretum.  We saw some fantastic pine trees and giant sequoias.  After that we parted ways with Lew and took a disco nap to get ready for the evening's concert. 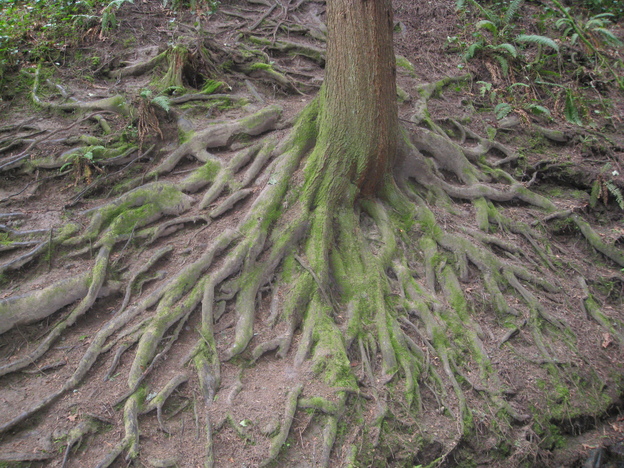 Now, the official impetus for this Portland visit was a live show by Laura Veirs, who I have been way into recently.  We headed to a restaurant near the venue but it was unexpectedly closed, so we had to settle for something quick at the Taco del Mar next door.  I bribed the staff with an extra tip in exchange for the turning off the horrible 80s muzak CD they had playing.  The we headed to Doug Fir Lounge for the show.  I drank 7/8s of a beer at the bar during the opening acts.  Laura's performance was really great.  The sound was clear and not too loud. It was a solo show and the audience was quiet and attentive (not so during the openers).  She's a great song writer and lyricist.  I was way into it. 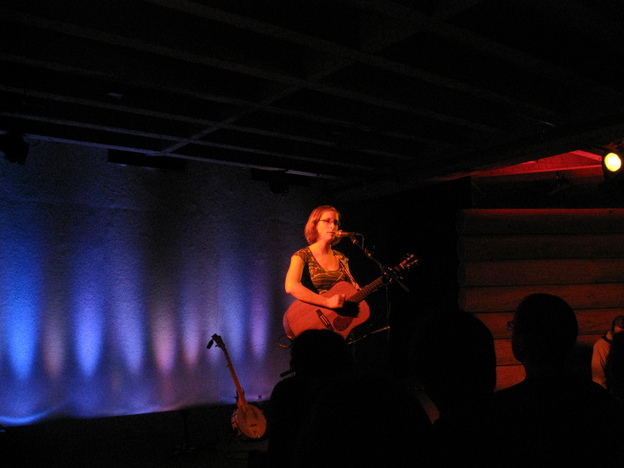 Next stop we throw our bikes onto a rack on Bernie's friend Anne's car (insert 40 Year Old Virgin bike in trunk reference here) intending to move on to Hopworks for a late night snack, but sadly they were closed, so that concluded Saturday evening festivities.

Sunday we met Wyatt for vegan brunch.  I was defeated by a stack of three corn cakes.  Then we meandered around a bit on bikes, stopping to watch various team sports at a city park.  We eventually did stumble on the game of bicycle polo we were looking for.  Wyatt got in there and tried his hand, but it takes a lot of coordination.  Most of the players use junky "fixies" - one speed bikes where the pedals are directly chained to the gears so you can brake and reverse with the pedals. These are good for stalling (balancing motionless), which is handy for polo. Players are penalized for dabbing (touching the ground with their feet) and must ride aronud in a circle before resuming play.

Then I wanted to make sure my drive back to Bend was mostly in daylight, so we biked back to Bernie's and I hit the road.  I'm looking forward to another visit at the end of the month.

Rest of the photos are here.