Well, Mt Bachelor was getting a few inches of snow every day this weekend, and the weather in town was generally leaning more toward Winter than Spring.  Bernard decided to postpone his trip out to Bend as it was too cold to climb outdoors.  So instead on Saturday I took the shuttle bus up to Mt Bachelor and did some skiing.  It was alternately sunny and snowy, and conditions were generally pretty good on the groomed trails.  There was a race happening, and there was some sort of costume theme going on as I saw racers in their form-fitting racing suit with inflatable ducks around their waste, superhero capes, Princess dresses, etc. Unfortunately, I looked at the pre-Spring shuttle bus schedule and apparently missed the last bus back, but they had an employee bus that was running to the same place and the driver agreed to take me back, thankfully.  Of course I went climbing indoors in the afternoon. 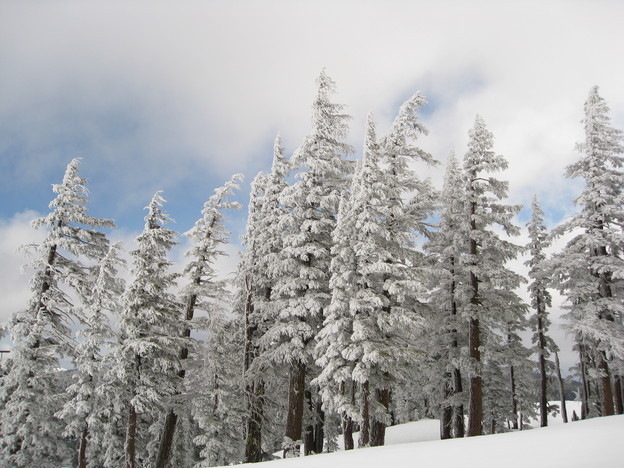 The highlight of the weekend was the roller derby match. Folks, I don't have the creative powers to come up with the ultimate sporting experience.  My mind is just not that powerful.  However, I know it when I see it, and I have now seen it. The ultimate sporting experience is all female no holds barred roller derby! Held in a venue sporting an exterior perimeter of windows boarded over with plywood, last night was a match put on by the Bend Oregon based Renegade Rollergirls.  Oh my God, it was so fantastic. All these hard core women strap on old school roller skates, knee and elbow pads, and helmets.  Then they skate around a small rink and beat the crap out of each other under the auspices of a loosely defined scoring system.  It's hysterical!  They all wear costumes that blend punk rock, biker gang, and death metal.  Fishnet stockings dominate, as do either pink denim or black leather miniskirts, ripped tank tops or what I guess one might call a "sport corset".

Sidebar - I want to note that I'm upping my blog game by blogging in real time from a cafe in downtown Bend - and a guy just crossed in front of the store on a very weird bicycle/scooter thing.  I had basically a scooter style stand with bicycle size tires, but attached to either side of the rear was an inverted U-shaped frame extending perpendicular to the frame, and inside each of these frames was harnessed a large dog.  Some kind of weird home-built scooter/sledcycle thing.  Pretty cool.

OK, back to rollergirls!  Some of them have a little face paint on.  Most of them have large tattoos.  The skater "Rainbow" has a big green mohawk on her helmet.  The are a wide variety of body types from short and husky (including the one name "Needa Reduction", and she did), to a skinny girl with ankles so skinny I thought for sure they would snap, to tall and built like a model. The task of "rabble rousing" and getting the crowd riled up is left to two other ladies on wheels. One of them is wearing basically a cat woman type black vinyl top (with a triangle cut away for cleavage), and a matching miniskirt.  She keeps hanging around right in front of me because her husband and three small blonde-haired sons are sitting directly in front of me. 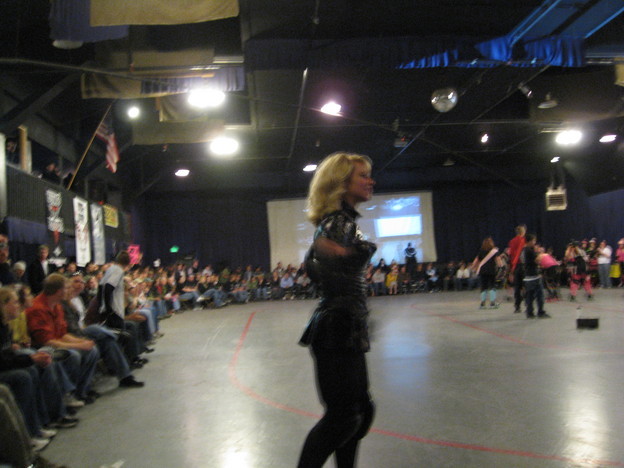 So, during the three 15-minute periods, the action is called over the loudspeaker by a local radio personality.  Basically there is one girl from each team that starts at the back, and these two "jammers" have to lap the pack.  After the first lap, every time a jammer passes a player from the oposing team, they score a point.  But basically, what it ends up being is a pack of about eight players bunch up in "the pack" and skate around slowly (their pace set by the "pivot"), and they engage in an ebb and flow of brawling with each other.  Then the two jammers, catch up and try to skate past the pack.  This is when it gets violent.  Trips, shoves, body checks, slide tackles, intentional crashing in front of someone, it's all legal.  I even saw the girl with the skinny ankles grab a jammer in a straight up schoolyard head lock and rain blows upon her helmet with her wrist guard.  That is, until the "Brawl Breaker" skates in and splits them up.  Oh, and to complement the awesome punk aesthetic of the whole thing, they play loud music that included Tool, Queen, and Kool and the Gang!  Fantastic.  Best $10 I have spent in a long time. 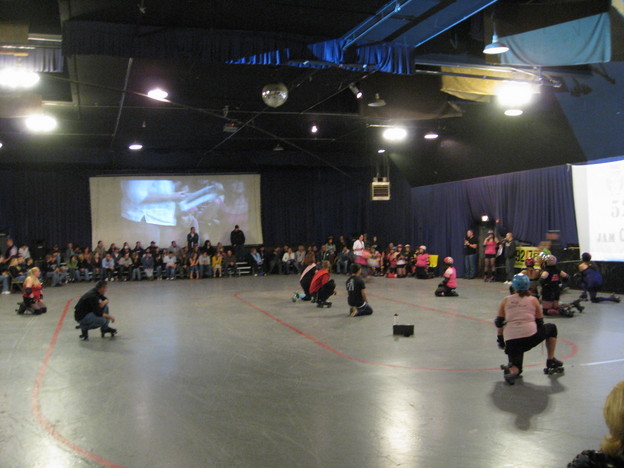 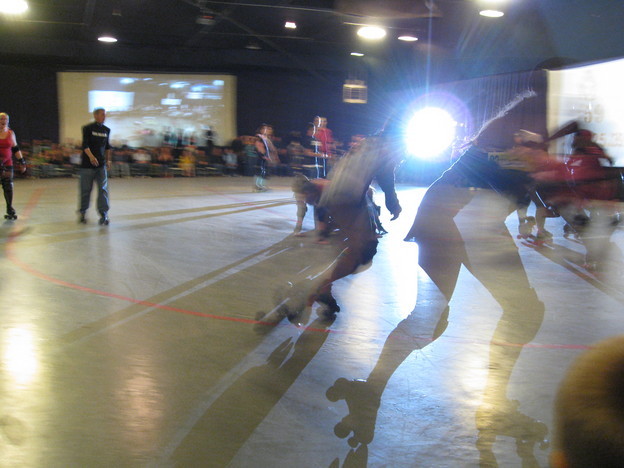