Last week I went rock climbing again on Wednesday, which was a lot of fun.  Thursday I went to two music performances.  First I heard classical guitarist Lily Afshar, which was really nice.  She is apparently the first woman to earn a Doctoral degree in classical guitar performance, which was surprising to me.  She ended up playing two encores, which I don't think I have seen before, which were her guitar arrangements of some Persian folk ballads.  These had some nice virtuosic touches and were quite lovely.

Then I headed to a dive bar for some local rock bands.  This was quite a scene.  The crowd ranged from punked out guys with the big earrings, tattoos, and mowhawks, a huge group of hard core lesbians with all the trimmings, a bunch of girls in 1950's party dresses apparently coming directly from some completely different event, some geeky looking guys, your standard college rock fan guys, and two older loner men who looked like alcoholics.  I later realized that the headlining band was an aggressive lesbian punk band, and thus their fans were out in force. Some were going for the college boy disguise with the baggy jeans, baggy hoody sweatshirt, and baseball cap pulled low over their jawline-length hair.  This included a couple, one of them sporting an "Alaska Grown" sweatshirt that settled into the booth in front of mine.  However, more often the boy disguise was paired with the punk-o version: dyed hair with the sides shaved, several pieces of gaudy fake jewelery, outfit revealing several tattoos, jeans with no belt showing the occasional glimpse of butt crack, fingerless gloves.  Before long there was quite a horde of these folks occupying the booths on either side of me - me solitary in my booth designed for four or six.  As I sat I lamented that fact that my writing skills are so clearly lacking compared to most of my blogging friends.  I have been going through and reading  No Simple Highway , written by a coworker of mine during his nomadic days in 1992, which has given me a lot of interesting material for perspective and comparison.

Chris arrived late Friday night and we decided to come back to Park City and hunt for a restaurant still open after 10pm.  This turned out to be a big challenge, but about the sixth or seventh place we checked was open late - a barbeque joint called Bandits.  We had a nice meal and started to catch up a bit.  Saturday we rented Chris some skis and then skied Park City Mountain Resort.  It was a nice day and we skied a bunch of blues most of the afternoon while Chris was getting back into it. He hadn't skied since out last outing in the Poconos in 2005.  Just before it closed at 3:30, I talked Chris into heading for the Jupiter Bowl, which is of course marked double black diamond (all bowls usually are as a matter of course), but I convinced him it would be easy to traverse his way down.  After the brief hike up to the bowl, we headed down. There was so much powder that even though it is quite steep, there was no worry about going too fast or losing control, so all was well and Chris made it down without any problems. 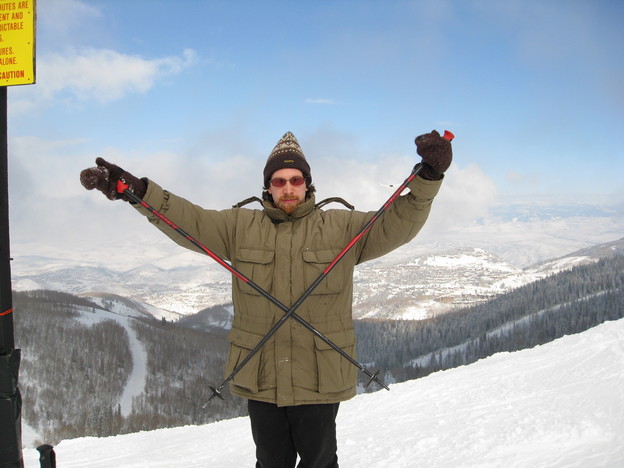 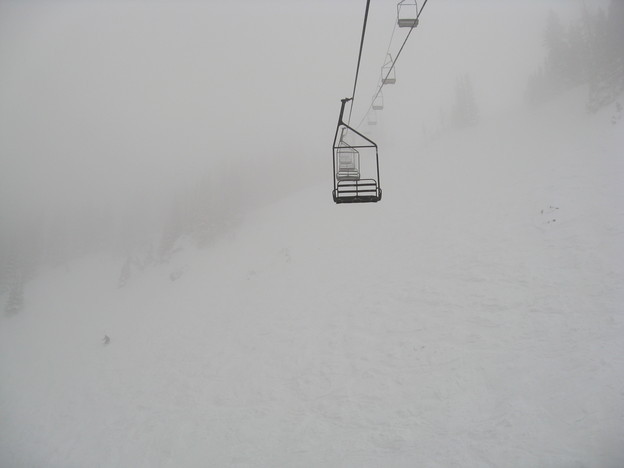 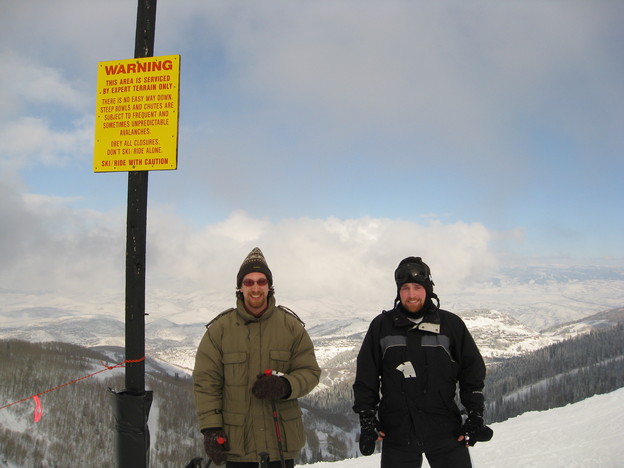 Then, after a seafood dinner in Salt Lake City, we headed to the University for a student production of Mozart's The Magic Flute, which I had never seen live.  Although all the trimmings of a student production were there, overall I found it enjoyable, and there were two strong lead voices, plus what I thought was a decent coloratura for the Queen of the Night. Chris, having lived with an opera singer for years, has much more exposure to outstanding coloratura, so he was less than impressed.

Sadly, it was raining on Sunday and windy so skiing was out of the question.  As plan B we went rock climbing at my favorite rock gym so far: the Front Climbing Club.  This is all bouldering, but the vibe is nice and they have a good weight room, cardio equipment, a yoga studio, ping pong, and billiards.  We then checked out the Utah Museum of Natural History, which was OK but we're used to NYC museums, so when we had seen it all in about one hour, we were feeling underwhelmed.

We debated whether to eat in Salt Lake or head back to Park City and chose the latter.  And it was lucky we did because it started to snow heavily and accumulate.  By the time we were a few miles from our exit, it was the treacherous 25 MPH winter driving I have become all too familiar with this season.  So we headed home to wait it out with farfale with butter, peas and sautéed garlic.  We hung out at home Sunday and watched Babel on DVD. It was actually nice to have a day off the slopes and a night at home.  Chris returned home Monday.

This week I went into overdrive at work as we're now at the meat of my first major deliverable project on new functionality.  I did stop Wednesday to go back to the rock gym which is so fun.