Disclaimer: this post is dedicated entirely to chronicling bad winter driving, so if you don't feel like reading about that, just skip this one entirely.

Wow, I just went through some serious winter driving treachery.  I left Boulder at 8:30 am Saturday heading west on I-70.  Once I got into the mountains, it was bad news.  The roads had a thin snow pack on them, but enough to spin you out of control like nobody's business.  So I drove between 20 and 40 mph up and down windy, steep hills - for about seven hours.  My wiper fluid froze so I had to just deal with the dirt slowly accumulating on my windshield.  My side windows were splashed with slush that turned into dirt as the slush ran off, making them and my side mirrors useless. So I didn't even reach the Utah border until around 3:30 pm.

Once I got into Utah, the drive was nice.  I made a pit stop in Green River, discussed the vast underestimate with my landlord, who was expecting me in Park City that afternoon (Google estimated 7 hours 7 minutes for the driver - clearly based on summer measurements. Ed, let's get some seasonal relevance in those google driving directions, OK?), While I had some lunch and used the restroom, the cashier had gone out and back twice for cigarette breaks. Although the stop had six gas pumps, five of them had no squigy and the one that was there was falling apart and dry, so I cleaned off my windows with a gimpy squigy and bottled water.  Then I headed back out there. The road flattened out and straighted out and the Sun came out. My wiper fluid thawed.

The next section of drive was fantastic though. Straight roads, 75 mph, and beautiful rock formations and canyons all around.  Since by now I had realized my initial plan of going to Park City first then Salt Lake City were completely unfounded, and even getting to Salt Lake City was out of the question at this point, I started enjoying a few "view area" pull-offs and looking at Black Dragon Canyon and Eagle Canyon as the Sun prepared to set.  My camera wouldn't sit flat on the roof of the car, so I improvised a surface out of a ziplock bag containing the chocolate biscotti Elise hade made for me.  They make a suitable camera stand.  However, I left them on the roof and as I turned to get back on the highway, they fell down and got caught between my side view mirror and the window.  And of course, having driven about nine hours at this point, I thought the natural thought: "Oh goody, it's raining chocolate biscotti" Horray!". I made it as far as Salina, UT when it got dark so I bunked down for the night at a Rodeway Inn and caught up with Andrew on the phone. 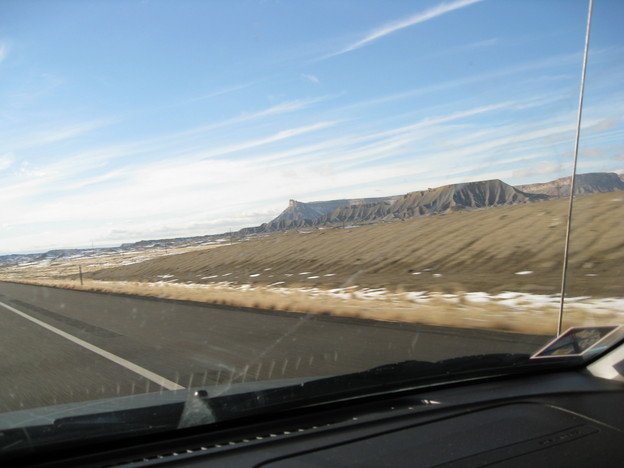 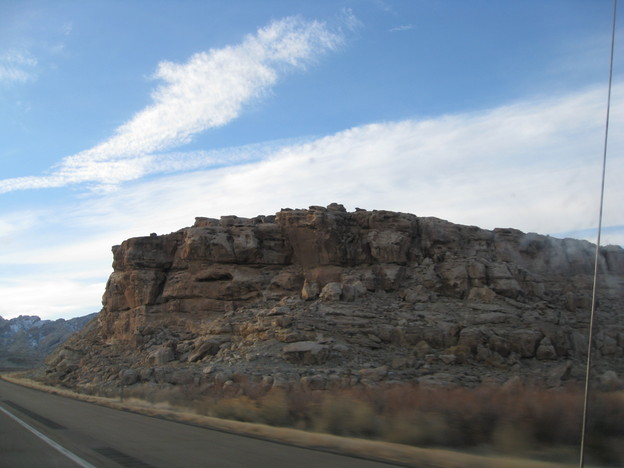 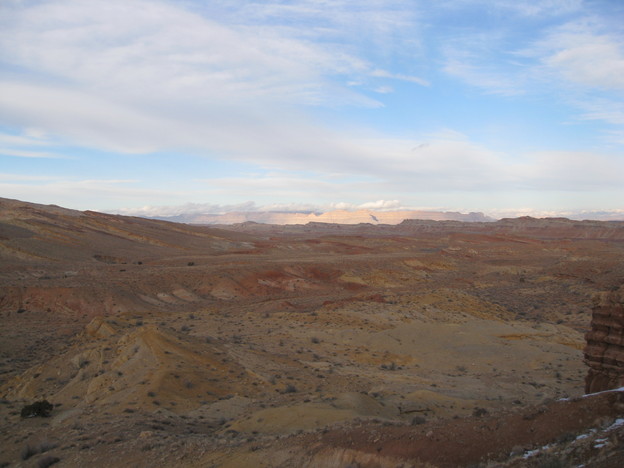 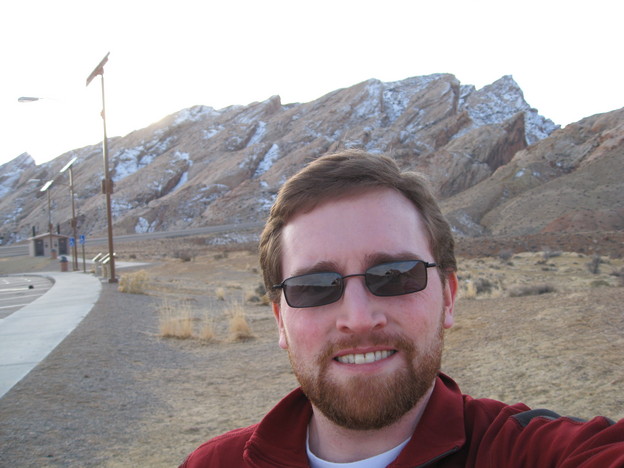 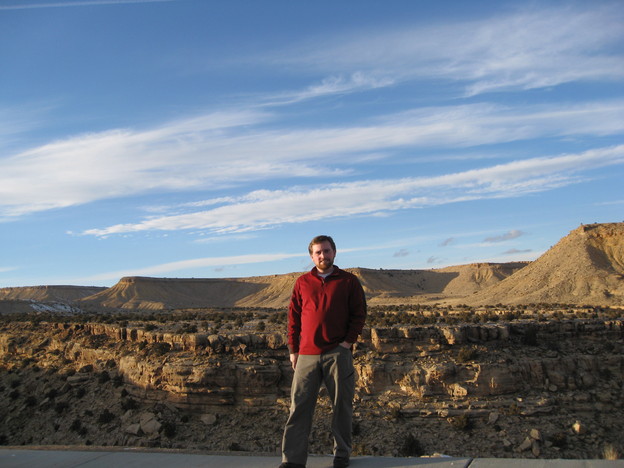 I tried to go to sleep around 10pm, but my normal schedule is clore to 1am these days so I awoke at 2, 4, and 6 am.  By 6 am I figure the Sun would be up by the time I showed and enjoyed the make-your-own waffles and hot cocoa with a splash of coffee, so that's how I started the morning.  I discussed with the hotel manager whether I should head straight North on the state roads to I-15 or continue on the larger I-70 West, which would take me about an hour out of my way but at least it would not be mountainous.  She said the state roads were straight and flat and they should be fine.  While navigating by a pocket US Atlas has a certain elegant simplicity: each state has its own page about 2"x3", when you get down to details, it can leave things up to the imagination.  Therefore, I thought the entry to Route 89 North would be just a few miles down I-70 West.  However, in fact I-70 West at this section is the same thing as 89 south, but it's a divided highway with very sparse exits, so I ended up wasting thirty minutes round trip to make and correct my error right off the bat.  Of course, later I realized that the little side road off the highway where my hotel was WAS Route 89 and I could have just turned left out the driveway and been on my way.  It was a bad start, and things just got worst.

Route 89 was indeed flat and straight, but it was also covered in about a half inch of snow with no visible lines.  So now I'm about sixty miles south of I-15 doing 30 mph on a very rural country route.  After about 10 miles of hoping things might improve I seriously contemplated turning around and sticking to the Interstate, but I pressed on.  I only encountered about six oncoming vehicles the whole way, but each was fairly nerve racking since you can't see where the center line is nor where the shoulder (assuming there is one and it's not just grass) starts), so you just have to try to avoid head on collision and also avoid driving off the road.

So this took a long time and it was about nine AM or so by the time I crawled my way onto I-15 North.  Things were initially better in terms of amount of snow on the road (but it was still slushy).  However, strong gusts of wind were blowing snow off the plains into the air across the road and visibility would suddenly go from quarter mile to about thirty feet.  Luckily I saw the lights of a plow a ways ahead and between wind gusts made my way up to three cars behind the plow.  The plow was going about 50 mph, which was faster than I would have gone otherwise, but my trade off was do 50 behind the plow and have its lights in sight or fall behind and risk slamming into a stopped car.  So again a good long period of white knucle driving.  Of course periodically one of the varieties of snow driving lunatics would pass on the left doing 70.  This was sometimes a truck, or once a bus, but usually it's some complete jackass in a pick-up truck with a the body raised up on shocks and the extra large tires sticking out the side.  Of coures, these assholse don't have mud flaps, so when they pass you, they dump about 50 gallons of slush onto your windshield.  Their other nice trick is if they pass you and then come into the right lane, they come back into the lane ten feet in front of you so you can be completely blinded by their slush trail and pelted by the rocks they kick up for a while.  Folks out there reading this, if your significant other is one of these pick-up truck driving fuckers, please, do the world a favor and kill him in his sleep.

I still had about 110 miles of this to go to reach Salt Lake City.  After a while the ground conditions changed and everything was melted so the road was just wet and the plow turned around.  This was fine, but it only lasted a few minutes before the big snowstormhit full force.  The snow accumulated quickly so in a few minutes it was that horrible 20 mph right hand lane drive we've all done.  All the sedan-driving people staying together in a 2-wheel drive convoy.  Before long it just got way too risky and I pulled off.  Off the highway, there was already six or eight inches of snow on the ground and I was worried I'd get stuck in or near the gas station.  I filled up with gas and chatted with a local guy who had also just come off the highway.  He said further up I-15 it just gets more steep and dangerous.  The snow was going into blizzard mode, so I decided to try to reach the Motel 6 two hundred yards behind the gas station and figure out what to do.

Well, the Motel 6 didn't have Internet access, so for me to stay there would be admitting that it was a complete fallout type situation, so I decided to brave one more drive back under the highway where there was a Best Western that had Internet access.  I had to do a little creative U-turning and a moment or two of looking at other drivers indicating "Yes, I'm in a Sentra, and no I can't get into a better position than this, so just wait till I get where I'm going".  But I did get there.

So I'll have to stay one more night and hopefully fly out tomorrow.  The snow only lasted a few hours and then it warmed up and melted.  So if I left now I could probably get to the airport OK in terms of road conditions, but I suspect they are still delayed and backed up a bit, although the flight I was scheduled to be on was delayed but then apparently left on time anyway.  It did start to snow again briefly, so I'm going to stay here and let the airports clear up and the plows clear things off and try tomorrow.  My main fear is that all the snow that's melting now will be ice tomorrow morning.  It was good to stop though because I needed a nap and now I'll just have a little over thirty miles to drive tomorrow.