Pouring ourselves to the airport

So Friday was the last night in Romania for me and Matt.  After staying a bit late at work to tie up loose ends, we took the US contingent out to the best restaurant in town - Lugano.  The restaurant scene hasn't quite made the changeover to the "customers are a good thing" attitude of capitalism yet, so if a restaurant is currently full when you arrive, they just tell you it's full and hope you'll go away.  However, having been turned away at our previous two attempts to eat here, we were determined.  We explained to the hostess that we were willing to wait for  a table, and then she indicated if we waited ten minutes she'd have one.  OK, problem solved. We also noticed that the same waiter with the funny haircut that works at the "Escala" bar we hang out at was working here tonight, so he'd be serving us for about eight hours straight.

So all four of us ordered the Chateaubriand, which is about the only decent beef you can get in town.  This night was also the only night I saw live music in any restaurant.  There was a fairly cheesy keyboard player and singer performing.  It was a bit odd though because they were playing so softly that you could easily not notice them or think it was a faint background radio.

We were supposed to meet up with a group of ten people at a lounge near our hotel at 10:00, but our planning was a bit off so we were running very late at dinner.  This prompted a flood of calls and TXT messages on the cell phone I had purchased, most of which I missed or ignored.  So about eleven we went to the lounge and eventually coordinated with Bogdan to meet us there.  We got a table when a big group left and had a nice hang out.

Now, there is somewhat of a tradition starting for the Americans leaving on an early morning flight back home to just stay out all night and "pour themselves to the airport" the next morning, as I'm told.  So this was our plan.  We next headed to Escala, again meeting up with our waiter from dinner, and joining up with two of the British contingent.  It was already getting fairly late, so we only had about one or two rounds here before they started to close up.  However, I did managed to bust out my sax and jam along with the music for a little bit.  The "DJ" (the guy who controls the laptop full of pirated music) had left already so I had to enlist the waiter to try to find something suitable for me to jam to. The best we could find on short notice (and short patience on his part for these silly American antics) was James Brown "Get Up/Sex Machine".  So I jammed with that a little.  When a few other people in the bar realized that I was looking for stuff to play along with, the went up to the laptop and tried to find some appropriate stuff. However, when I saw that they had resorted to hunting for youtube videos to play, I drew the line and just played some  a capella funk stuff.  Then we packed up and continued the pub crawl.

The last stop was another small local bar where Bogdan quickly negotiated for control of the music laptop and queued up Pink Floyd The Wall.  After a last round of beers (for them) as it approached 5am, Matt and I headed back to the hotel to pack up and get our cab to the airport.  We got there OK, but were dead tired.  There was a fairly long delay there both to get on the bus which takes you to the plane, and then one on the bus before the bus actually started driving. Matt couldn't quite hold out. 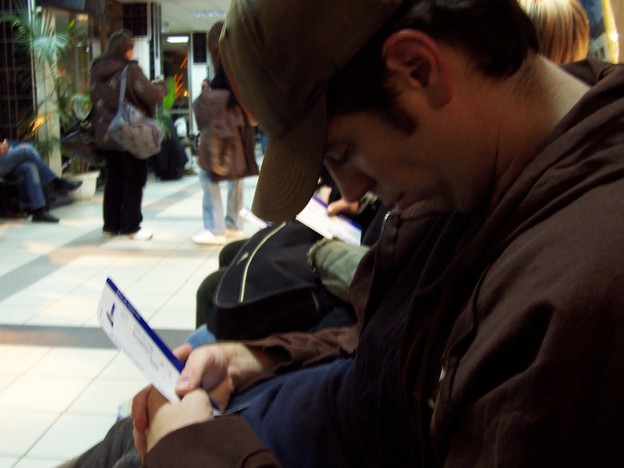 The flight back was decent, and obviously we slept a good deal of it.