Friday I met up with Alex for lunch and to lend him my tenor sax.  After that I headed to the airport.  I took the PATH as far as 14th street before realizing I still had the keys to my friend John's apartment in my pocket (I was staying there a few days this week before the trip), so I headed back to the office, with my luggage in tow,  to leave the keys there and then made the 4-train, 90 minute trek to EWR.  It was very humid in NYC this week, so this involved a lot of sweating.  It felt good to switch to a dry T-shirt when I arrived at the airport.

Flew Alitalia to Milan which was OK and only mildly torturous.  Then a two hour layover in Milan and a quick flight to Cluj-Napoca, Romania. I arrived at the small airport in Cluj, went through customs without saying a single word, grabbed my bags about fifteen feet from customs, and met Horatiu, a coworker based in Cluj, who gave me a ride into town and dropped me at my Hotel.  On the way in from the airport, we drove past the new Opsware (now HP) office. It stands out as of of the few modern buildings amongst older European styles and communist era block housing. Horatiu met me at the airport no problem and I got settled in the Hotel.  There was a wedding in the hotel as well as a separate wedding motorcade on the streets nearby.  We drove beside the bride and groom's car a ways.

Horatiu was starving since he hadn't eaten anything yet that day after a long night clubbing on Friday, so I quickly freshened up and we went to get dinner at one of the more traditional local restaurants.  After dinner and a nap, I ventured out to the supermarket for a few snacks and essentials for the room, then did some exploring of the neighborhood.

Without wasting any time, that night Horatiu introduced me to the Cluj night club scene.  Cluj has somewhere between 60,000 and 100,00 university students, depending on who you ask.  Clubbing is pretty much the leading night life activity, and techno music permeates the city.

We went to two clubs, the first one smaller and extremely crowded, the second one larger and just very crowded.  At the first club, we were joined by a few other of the local Romania guys and eventually the Opsware US contingent.

Now normally I avoid crowded, smoky night clubs, but this trip was actually a lot of fun.  At the second club we were joined by another group of ex-patriots that work at their company's Cluj office.  Two of the Opsware US guys have decided to extend their "training" visits to just shy of the 90-day you-need-a-Visa cutoff, and so they've made some local connections.

The club itself was packed with beautiful Romanian women, full of cigarette smoke, and decked out with lasers, smoke machines, paid dancers on the bar, etc. I drank about 1/4 of a beer, to avoid adding soda to a fairly long list of things that made me stand out in a bad way.  Brandon took a hilarious photo of Jeremy ogling the dancer nearest our group. 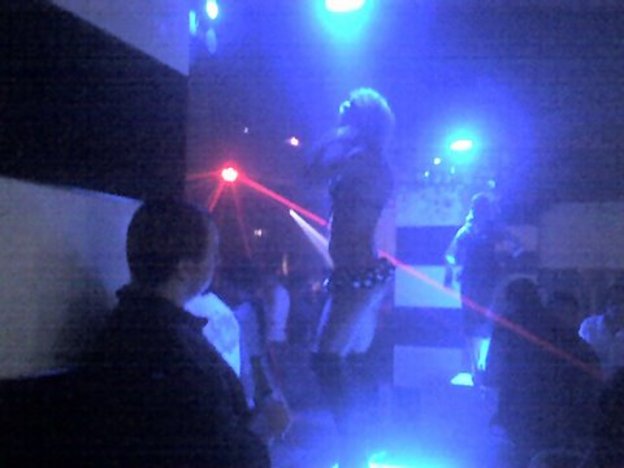